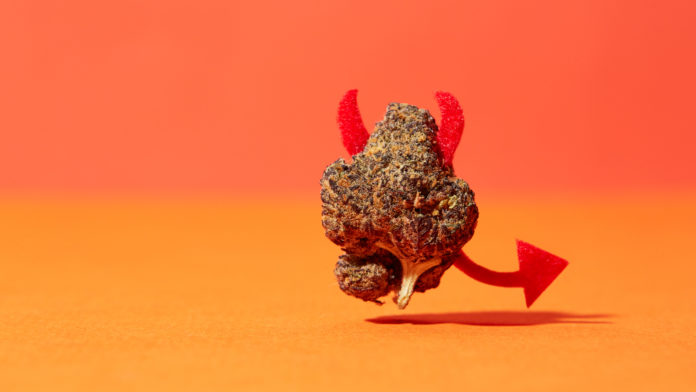 There are so many nicknames for cannabis — more than 1,200 in fact — that it’s hard to keep track: weed, ganga, bud, broccoli, herb, wacky tabacky, Mary Jane and pot just for a start. The DEA even keeps a list of cannabis code words and nicknames for trainees and agents, most of which yours truly had never heard of — I mean, smoochy woochy poochy?

Broken down into categories, these nicknames tend to run the gamut and cover weed quality, amounts, type, joints, consumption effects, and even the people who consume it. And the language of cannabis continues to evolve as more Americans gain legal access to the plant. Entirely new segments of the marketplace, such as concentrates and edibles, gain slang terms of their own.

But one nickname in particular seems to be getting less attention in the age of legalization: the Devil’s Lettuce. Why was it called that and what did it say about cannabis consumers throughout the 20th century?

The history of “marijuana” and the Devil’s Lettuce

When it comes to “devil” and “lettuce,” it’s safe to assume that the lettuce part of the term makes at least a little bit of sense because it’s green, but how did the word ‘devil’ become part of the cannabis nickname too?

Looking through a broad lens, most cannabis nicknames came about because it was necessary in the past to keep secret the possession, selling, and consumption of cannabis. However, others came to be due to intentional propaga intended to create negative and inflammatory sets of beliefs not only about the perceived dangers of cannabis itself, but also about misportraying the people who consumed it — “Devil’s Lettuce” falls into this category.

But first, let’s jump into the wayback machine and head to the early 20th century, when  cannabis prohibition laws were slowly, surely, and heavy-handedly becoming codified.

The word “marijuana” first came to the Americas in 1874 courtesy of Spaniards who brought cannabis to Mexico for use as industrial hemp. At first, the word “marijuana,” “marihuana,” or “mariguana” was anodyne, but as the Mexican Revolution prompted many of its citizens to flee to the US and seek migrant labor in the 1890’s and beyond, the word took on a more nefarious meaning.

Predictably, an influx of immigrants into the US prompted a surge of racist and anti-immigrant sentiment. NPR unearthed a trove of news articles from the early 20th century implying that marijuana incited violence among the Mexicans who smoked it. Here’s one headline from 1925: “KILLS SIX IN A HOSPITAL; Mexican, crazed by Marihuana, Runs Amuck With Butcher Knife.”

If you’ve heard the term “loco weed,” headlines like that are what prompted that nickname.

The devil in prohibition

If cannabis has one great villain it would be Harry J. Anslinger. A  government official who served five presidents from Herbert Hoover to John F. Kennedy, Anslinger was the first to head the Federal Bureau of Narcotics (now the DEA) from its founding in 1930 until 1962. Anslinger was a zealous prohibitionist and spent his career putting the full force of the federal government’s resources into misrepresenting consumers and prohibiting cannabis consumption.

Though Anslinger was probably the most ardent prohibitionist, prior to his role at the FBN, states were nibbling around the edges of cannabis consumption on their own. New York was one of the first to put parameters around cannabis in 1860, followed by other states, culminating in the 1906 Pure Food and Drug Act, which demanded that states label any medicines that contained cannabis indica.

Cannabis prohibition hit its stride in the 1930s with the release of the infamous propaganda film Reefer Madness — also known as Tell Your Children and other less subtle titles like Dope Addict and Doped Youth. This film revolved around “pushers” luring high school students into cannabis use and the tragedy that would inevitably follow, like suicide, rape, murder, hallucinations and descent into madness. The following year, the US government passed the Marihuana Tax Act of 1937, which did not make cannabis illegal per se, but taxed it so strenuously that it became impractical to use, possess, or prescribe it.

It’s indisputable that Anslinger’s talk about the cannabis consumers of his day was fueled by racism. He frequently suggested that its consumption was driven by Black people and immigrants from Mexico, who would entice women to use cannabis to gain the sympathies of white women who would — of course and with many clutched pearls — get pregnant. All of these claims have been disputed and categorized as race-baiting propaganda.

So, the “Devil’s Lettuce” is just another nickname for cannabis, right?

Yes. It’s impossible to know exactly who coined the term and how precisely it came to be, but it seems pretty safe to conclude that the term came about in Anslinger’s time, when paranoia and fear about cannabis consumption was high (so to speak) and many of the nicknames that came about had their roots in vilifying particular groups of people.

Let’s leave this one to the dust heap of history.