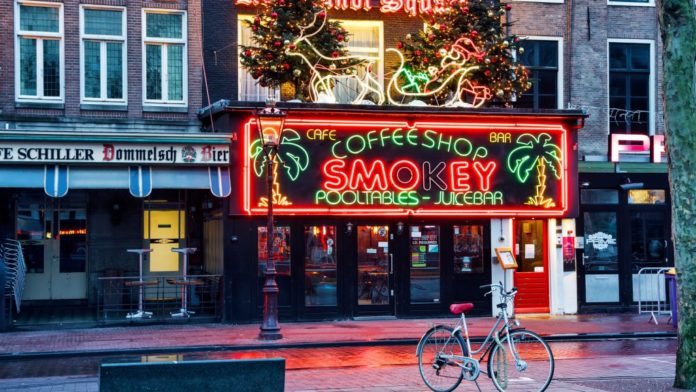 Amsterdam is known the world over for their famous coffeeshops,  easy access to weed, and safe consumption spaces. But what is the history behind Amsterdam’s storied cannabis establishments and its seemingly permissive and lenient laws, especially given that, even in Amsterdam, cannabis remains illegal? Let’s take a look behind the scenes.

First things first: As mentioned earlier, despite all evidence that suggests otherwise, cannabis is not legal in Amsterdam locally, nor the Netherlands in general. What the Netherlands does have is progressive drug policy that distinguishes hard drugs from soft drugs.

According to the Netherlands government, hard drugs like LSD, heroin, cocaine, amphetamines, and ecstasy are incredibly hazardous to your health and have a much higher level of risk associated with their use. On the other hand, soft drugs, which include substances like cannabis, hash, sleeping pills, and sedatives, are considered to be less hazardous to your health. While not specifically decriminalized, the “more or less” official policy is one of non-enforcement for small use and possession.

How drug policy and reform shaped cannabis in the Netherlands

Interestingly, an abstract on the Opium Act of 1976 amendment says that the policy not only establishes basic principles and operating practices for contemporary drug policy, but that Dutch policy is “pragmatic and non-moralistic…Within the ideology of normalization, illegal drugs are seen as a limited and manageable social problem rather than as alien threat forced on an otherwise innocent society.”

In other words, a complete 180 from federal drug policy in the United States.

The amendment to the 1976 Opium Act created a more welcoming landscape for coffeeshops, never mind that Amsterdam’s first cannabis coffeeshop, The Bulldog, opened its doors in 1975. But the amendment provided tacit permission for all other coffeeshops to follow. In the 1990s, the Netherlands had more than 1,500 coffeeshops. Today, there are about 570 shops throughout the country, approximately one-third of which are in Amsterdam alone.

Even with all the stark differences between Dutch and U.S. drug policy, there are some similarities. For example, the government does indeed monitor and regulate the industry with measures that will sound familiar to U.S. consumers: No selling to people under the age of 18, no sales in excess of five grams per person per day, and no sales or consumption near schools. However, one policy that is specific to the Netherlands (but de facto in the U.S) bans the sale of hard drugs.

Another familiar regulation tactic could be pulled right out of the U.S. drug policy playbook, and that is patchwork regulation policies, whereby each municipality can decide their own local policies. Some may have no coffeeshops at all, while others espouse “no growth” policies, and create ever wider “no coffeeshop” zones. This has the accumulated effect of confusing and discouraging consumers, forcing them (and their wallets) to more lenient jurisdictions.

The ins and outs of Amsterdam’s booming cannabis tourism

There have been efforts to forbid tourists from consuming at coffeeshops, a money-losing proposition given that approximately 65 percent of travelers ages 18—35 said that cannabis was the primary motivator for their visit (caveat: this number was unearthed pre-COVID). In defense of the Netherlands, lawmakers in Amsterdam have been looking for ways to decrease nuisance complaints that often accompany overtoursim to cannabis cafes and brothels, and to preserve cultural treasures and maintain quality of life for the locals.

Nonetheless, visitors spanning the globe set their sights on Amsterdam — who have fewer limitations on their coffeeshops — for a rare cannabis cultural experience. In a coffeeshop, consumers can partake in food, non-alcoholic drink, and enjoy some local ganja, all while law enforcement looks the other way.

However, the weed that finds its way to the coffeeshop isn’t grown in the backyard. Even the most up-and-coming coffeeshop owners have to do legal contortions to run regulated establishments while having to procure their product on the illicit market.

Despite lax soft drug laws in the Netherlands, cannabis raids by law enforcement are ongoing, putting the farmers supplying coffeeshops at legal risk. The government itself has recognized the limitations and contradictions of this policy, and has enacted “an experiment with controlled supply of cannabis” to ascertain how a regulated supply chain affects crime, safety, public nuisance, and public health.

Covering 10 municipalities, legally produced cannabis cultivated by 10 selected growers will be sold in participating coffeeshops. The experiment, which will take place over the course of four years, will be monitored by an independent guidance and evaluation committee overseeing the researchers, who will then take the results of their findings and recommendations back to  government officials. After that, the fate of Dutch coffeeshop policy will be in their hands.

Will enjoying weed in the marijuana capital of the world continue to be a foregone conclusion? We shall see.