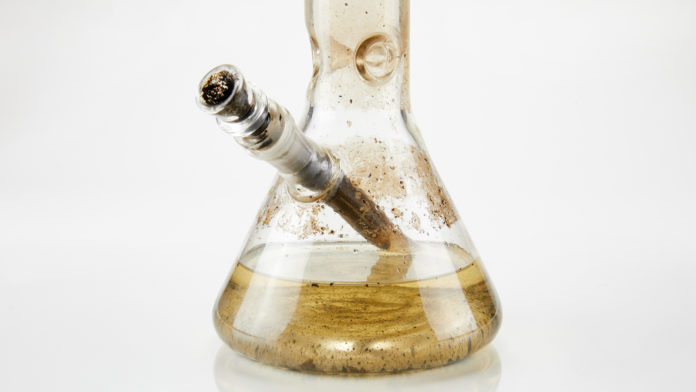 When we think of bongs, we tend to picture them as the 1960s creations made by renowned glass artist Bob Snodgrass. Snodgrass, who ushered in the golden age of the bong, was the first to popularize those made of borosilicate glass. But before Snodgrass came along, bongs made of bamboo, animal horns, or metal were used by ancient peoples in China and Persia, as well as modern-day Russia, to consume tobacco, cannabis, and opium.

The earliest bongs, which date back more than 2,400 years, did not use water. It is believed that the use of a water pipe came about many hundreds of years later in 16th century China before migrating westward via the Silk Road.

Bongs, which can be made of either glass or plastic, are an elegant and efficient substance delivery system. Though some have more bells and whistles, your basic bong is made of just three parts: a base, a stem, and a mouthpiece. Consuming cannabis with a bong is also much simpler than rolling a joint or dabbing. Simply fill the base with water, light the cannabis, and inhale.

Many consumers prefer bongs because they deliver a smoother toke and cause less irritation than hitting from joints or handheld pipes. Though there has been very little research on the overall health effects of consuming cannabis with a bong, some believe that bong water may trap some of the heavier particles that irritate a smoker’s lungs. And there has long been the rumor that consuming cannabis via bong is a safer and healthier way to consume cannabis overall.

Are bongs the healthier smoking option?

However, that theory has been debunked by none other than the California chapter of the National Organization for Reform of Marijuana Laws (NORML) and the Multidisciplinary Association for Psychedelic Studies (MAPS). With a focus on the cannabinoid/tar ratio, they found that water pipes like bongs actually filter out more THC than they do other tars, which requires consumers to ingest more to reach the desired effect. Cannabis consumers also tend to hold in their inhalations longer, which may expose sensitive lung tissue to chemicals for a longer period of time.

Then there is the problem of dirty bong water — it’s full of bacteria and tar. Even if you use filtered water, bacteria will start to form in bong water less than a day after consumption.

Even in clean water, bacteria is never safe to consume in parts per million that the body can’t handle, and may cause stomach cramping, diarrhea, vomiting, and abdominal pain. If your bong has dirty water, you’re providing bacteria a direct pathway to your lungs.

Our own mouths also contain bacteria that contribute to germ-filled bong water (double that if you share your piece). Dirty bong water can also ruin the aroma and taste of your chosen strain. And let’s not forget about the dreaded bong water spill, a chemical-laden, stain-causing mess.

For help you to hit bongs as safely as possible, there are a few myths we need to address.

As the aforementioned MAPS/NORML study uncovered, there is more tar than THC in a bong, plus all the bacteria from your mouth,possibly  your friend’s mouth, and the bong water.

The second myth is that bongs are as dirty as a toilet seat. While this seems a bit hyperbolic, there are case reports that back it up as truth. One study revealed several instances where some bong consumers contracted pulmonary tuberculosis from sharing bongs, while another developed necrotizing pneumonia, which can cause permanent lung damage.

What to do with old bong water

Is there anything to be done with old bong water other than dumping it down the drain? Some consumers have shared that they water their plants with bong water, though that may be unlikely to help the plant since they require clean, fresh water — none of which old, dirty bong water provides.

Keep your health at the forefront of your mind and dump the bong water after each sesh.

It’s  also important — especially in the time of COVID-19 — to keep your smoking gear properly sanitized.

For a quick clean, consider wiping the mouthpiece with some isopropyl alcohol and cotton ball or round. For a deeper clean, check out our step-by-step guide to getting a sparkling bong. You’ll only need a few ingredients: coarse sea salt, water, plastic zipper bags,  and a little bit of elbow grease.

How to be a Low-Waste Cannabis Consumer