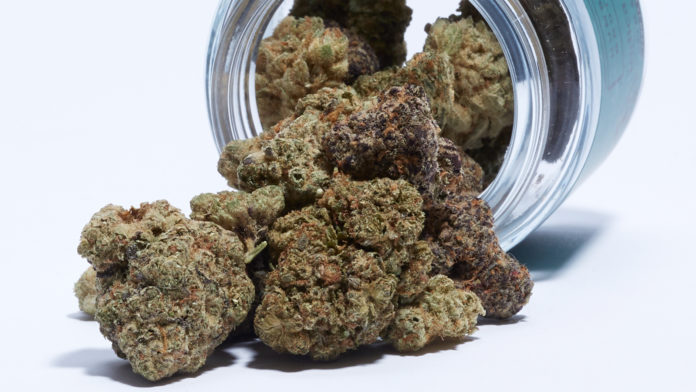 Support for legalizing marijuana in New York outpaces opposition by a margin of two to one, according to a new poll.

Respondents were asked to rate their level of support for a variety of policy issues. On legalizing cannabis, 61 percent of New Yorkers said they’re in favor of enacting the reform at the state level, compared to 30 percent who are opposed. Nine percent said they’re undecided.

In a separate question, sixty percent of those surveyed similarly said they back federal marijuana legalization, while 30 percent said they’re against the policy and 10 percent weren’t sure.

Demographic breakdowns weren’t made available for any of the new cannabis data.

The survey from Spectrum News and Ipsos—which involved interviews with 1,451 adults from October 7-19—was released days after Gov. Andrew Cuomo (D) said that the state will legalize marijuana “soon,” adding that tax revenue generated from cannabis sales will contribute to economic recovery efforts amid the coronavirus pandemic.

“There are a lot of reasons to get it done, but one of the benefits is it also brings in revenue, and all states—but especially this state—we need revenue and we’re going to be searching the cupboards for revenue,” he said. “And I think that is going to put marijuana over the top.”

Cuomo has included legalization in his last two budget proposals, but negotiations between his office and the legislature fell through both times, with sticking points such as how cannabis tax revenue will be allocated preventing a deal from being reached.

A top adviser of his said earlier this month that the plan is to try again to legalize cannabis in New York in early 2021.

“We’re working on this. We’re going to reintroduce this in our budget in January,” he said. “We think we can get it done by April 1.”

Cuomo was similarly asked about legalization as a means to offset the budget deficit caused by the pandemic in May.

While he said it’s the federal government’s “obligation as part of managing this national pandemic that they provide financial relief to state and local governments,” he added that “I support legalization of marijuana passage. I’ve worked very hard to pass it.”

“I believe we will, but we didn’t get it done this last session because it’s a complicated issue and it has to be done in a comprehensive way,” he said.

Cuomo indicated in April that he thought the 2020 legislative session was “effectively over” for the year and raised doubts that lawmakers could pass cannabis reform vote remotely via video conferencing amid social distancing measures.

Assembly Majority Leader Crystal Peoples-Stokes (D) made similar comments when asked about the policy in April, though she seemed to signal that she laid partial blame for the failure to enact reform on the governor prioritizing other issues during the pandemic.

In June, a senator said the legislature should include cannabis legalization in a criminal justice reform package, making the case that the policy change is a necessary step especially amid debates over policing reform. That didn’t come to pass, however.

The New York State Association of Counties said in a report released last month that legalizing marijuana for adult use “will provide the state and counties with resources for public health education and technical assistance” to combat the pandemic.

The chamber passed a bill in July that broadens the pool of people eligible to have their low-level marijuana convictions automatically expunged. That was preceded by a Senate vote in favor of legislation to prevent tenants from being evicted solely because of their legal use of medical marijuana.

Thanks to a bill expanding cannabis decriminalization in the state that the governor signed last year, the New York State Unified Court System made an announcement last month outlining steps that people can take to clear their records for prior marijuana convictions.

Locally, a local law enacted in New York City this summer bans pre-employment drug testing for marijuana for most positions. It was finalized in July following regulators’ approval of certain exemptions.

In other polling news, voters in neighboring New Jersey appear positioned to approve a ballot referendum to legalize cannabis next week.

A survey released last week shows that 65 percent of New Jersey voters are in favor of the reform proposal.

The results are statistically consistent with the prior three polls of Garden State voters from the same firm as well as one from Fairleigh Dickinson University, which similarly found roughly two to one support for the measure. A separate survey released earlier this month by Stockton University showed three to one support for legalizing cannabis among New Jersey voters.