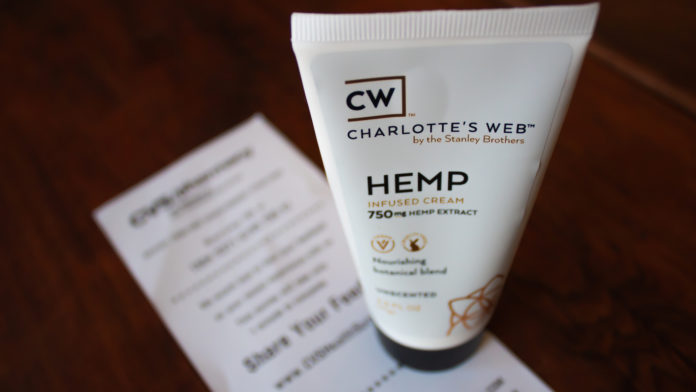 Charlotte’s Web is a hemp cultivar developed by the Stanley Brothers, a family-bound group of Colorado growers, to have high levels of non-intoxicating cannabidiol (CBD). Falling well underneath the .3% THC outlined in the 2018 Farm Bill that opened the United States consumer market to CBD products, the proprietary strain is processed into full-spectrum hemp oil and sold in capsules, gummies, topical balms, and even dog treats.

The life-changing benefits reported by those who rely on Charlotte’s Web and the CBD oil it produces to manage seizures, anxiety and other symptoms have changed hearts and minds in the medical and legal fields, leading the way for greater access while playing a surprising role in the widespread acceptance of cannabis-derived medicine.

The strain’s namesake, Charlotte Figi, became the poster child for the medicinal CBD movement, and a symbol of hope to thousands. She recently passed away following treatment for a potential case of COVID-19, and her legacy was honored across the world.

“Charlotte Figi single-handedly transformed how the world viewed medical cannabis and children with epilepsy,” Illinois State Representative Bob Morgan wrote on Twitter. “She suffered so much so that others would not have to.”

Charlotte Figi and the road to medicinal CBD

While CBD products are commonplace today, public awareness around the non-intoxicating cannabinoid was low in 2006 when Charlotte had her first seizure at three months old. Her home state, Colorado, had begun their medical patient registry just six years earlier; less than ten states had legalized the sale of cannabis to qualified patients nationwide.

A frantic hospital visit led to few answers; blood tests, magnetic resonance imaging and recording of her brain wave patterns revealed nothing out of the ordinary. Over the next year, her seizures returned, lasting hours at a time and leading to frequent hospital stays and prescriptions to seven different drugs, including habit-forming barbiturates and benzodiazepines.

Despite the medication, the seizures always returned — and now, Charlotte was suffering status epilepticus, a condition where seizures last more than 30 minutes or come in clusters, with no time for her to recover between each electrical disturbance in her tiny body. Seizures of this length carry a high risk for injury and death to neurons and neuronal networks, which can lead to developmental disability, permanent brain damage, and death.

At two and a half, doctors confirmed, via tests for a particular gene mutation, that Charlotte was living with a rare, drug-resistant form of epilepsy known as Dravet Syndrome. Her parents tried everything to manage the seizures, looking into experimental drugs and putting her on a ketogenic diet recommended by a specialist.

When she was five, they decided to try medical marijuana.

Getting two doctors to approve the youngest medical marijuana patient in the state was only the beginning of the challenge; they also had to find an appropriate product for such a small child. Meeting the Stanley brothers, the group behind a family-owned grow operation, changed the future forever: not just for one little girl, but for the brothers’ business and the cannabis movement as a whole.

The dispensary owners had crossbred a strain containing 22% CBD and levels of THC so low they’d jokingly dubbed it “Hippie’s Disappointment.” It had next to no value when sold to customers looking to get high, but the extracted oil was priceless to the Figi family.

During her first years of treatment with cannabis oil, Charlotte went from having 300 grand mal (or generalized tonic-clonic) seizures a week to only two to three a month, usually in her sleep. She regained the ability to walk and feed herself. Frequent hospitalizations turned into days at school, horseback rides and games with her siblings.

Inspired by her progress, the brothers named the strain Charlotte’s Web. CNN’s Sanjay Gupta featured the company in his August 2013 special “Weed,” telling the story of Charlotte’s miraculous recovery publicly for the first time. After fifteen thousand families reached out in the next month, they decided to pivot their business away from medical marijuana and toward the production of low-THC industrial hemp.

The company’s fields in Colorado, Kentucky, and Oregon are subject to rigorous soil and water tests to ensure they’re free from microbes, bacteria, and toxins before the first seed is planted. Farmers tend 250,000 plants by hand, testing phytocannabinoid levels every five days to ensure the plants are harvested at their peak.

“Most of my time with the company has been boots on the ground, hands-on farming, and developing with my brothers a lot of the agricultural processes,” says Assistant Director of Cultivation and company co-founder Jordan Stanley. “The core of it from day one has been to grow the best hemp genetics, and that starts on the farm.”

More than eighty phytocannabinoids, terpenes, and flavonoids are present in Charlotte’s Web hemp extract including CBG, CBC and even trace amounts of THC. While the company isn’t allowed to make any medical claims, testimonials flood in from families dealing with conditions that lead to seizures including autism, chromosomal disorders and genetic conditions like tuberous sclerosis complex.

Studies have shown that cannabidiol, whether in the form of hemp oil or US Food and Drug Administration (FDA)-approved prescription treatment Epidiolex, can significantly reduce seizures resulting from treatment-resistant Lennox-Gastaut syndrome and Dravet syndrome by regulating neuronal hyperexcitability. Evidence suggests that CBD activates and desensitizes ion channels known as capsaicin and vanilloid receptors. In healthy humans, these proteins detect temperature, respond to stimuli like spicy food, and transmit and modulate pain; in epilepsy, neuropathy and chronic pain patients, the receptors are overly sensitive, their response amplified.

For parents, like Charlotte’s mother Paige Figi, accessing essential treatments for their children wasn’t easy. She’d been lucky enough to live in a state with medical marijuana, but each day she heard from families who didn’t have the same options.

The Stanley Brothers established a non-profit foundation, Realm of Caring, to help such families access cannabis treatment. Realm Cares provides grants to offset the cost of cannabinoid therapy to qualified applicants; the Joy Fund is an interest-free loan for people looking to relocate to a state that has legalized medical marijuana and/or low-THC hemp oil.

Paige Figi’s non-profit organization Coalition for Access Now worked with bipartisan representatives to introduce a federal bill, the Charlotte’s Web Medical Access Act of 2015, to remove CBD-rich plants from the legal definition of marijuana, thereby exempting it from classification as a Schedule 1 substance under the Controlled Substances Act (CSA).

The group has also lent support in state legalization battles, sharing the story of not just Charlotte but many children like her to show skeptical minds the life-and-death urgency behind opening access to alternative treatments. “There’s not a lot that’s going to keep a mother quiet when their kid is suffering, and there was no stopping that movement,” Paige Figi told Charlotte’s Web.

Due to Figi’s tireless advocacy, state bills to legalize high-CBD, low-THC cannabis strains are sometimes nicknamed “Charlotte’s Web laws.” In 2014, Florida Governor Rick Scott referenced the strain when he approved the use of CBD oil or vapor for approved patients.

“As a father and grandfather, you never want to see kids suffer,” Scott said in a statement. “The approval of Charlotte’s Web will ensure that children in Florida who suffer from seizures and other debilitating illnesses will have the medication needed to improve their quality of life.”

In 2018, patient advocacy groups found an unexpected success with a Farm Bill that reclassified hemp (legally defined as cannabis sativa plants containing less than .3% THC by weight) as an agricultural commodity governed by the U.S. Department of Agriculture. Charlotte’s Web Holdings, Inc. released a statement where President and CEO Hess Moallem celebrated the landmark ruling.

“The Farm Bill provides the added legal clarity necessary to expand our distribution reach,” Moallem said. “Hemp’s removal from the CSA has been a core legal requirement for many national retailers wanting to carry whole-plant hemp extracts.”

The fight is far from over; the sale of industrial-hemp derived CBD still faces federal legal challenges from the U.S. Food and Drug Administration (which has not approved it as a medical treatment, dietary supplement or food additive) as well as shifting regulation and enforcement in each state.

As the movement continues, the story of Charlotte Figi, the Stanley brothers and the World’s Most Trusted Hemp Extract™ will continue to move forward.

Study Explores the Relationship Between Vaping Benefits and Overuse