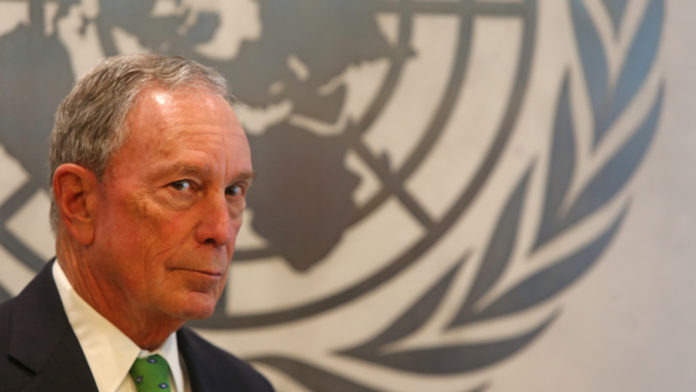 Mike Bloomberg, a 2020 Democratic presidential candidate, released a criminal justice reform plan on Tuesday that calls for the decriminalization of marijuana possession and mass expungements for prior cannabis convictions.

The former New York City mayor — who has recently faced sharp criticism in recent days over a resurfaced 2015 recording of him defending controversial stop-and-frisk law enforcement tactics and racially disparate marijuana arrests — seems to be trying to repair his image on policing issues as primary season heats up.

Among Bloomberg’s reform proposals is to “de-criminalize the use and possession of marijuana nationwide, commute all existing sentences, and expunge all records,” according to his campaign site.

“Mike believes that further scientific study is required to assess the health effects of marijuana. In the meantime, he believes that no one should go to jail for smoking or possessing it,” the plan states. “He recognizes that the criminal approach to marijuana has fallen disproportionately on the Black community: While white and Black people in the U.S. use marijuana at roughly equal rates, Black Americans are nearly four times more likely to be arrested for possession.”

Notably missing from the plan is a call to federally legalize cannabis — a policy change backed by all of his competitors for the Democratic nomination except former Vice President Joe Biden.

Bloomberg “believes that for the moment this is an issue best left to the states, taking public health and safety into account,” the site says. That’s a stance his campaign signaled would be part of his platform late last year.

Bloomberg has a history of opposing legalization.

But looking back at his record and comments about legalization, it doesn’t necessarily come as a surprise that Bloomberg is declining to personally embrace the reform move, despite its popularity among Democratic voters. Prior to launching his campaign last year, the former mayor said that legalizing marijuana is “perhaps the stupidest thing anybody has ever done”

He was recently pressed on that comment and asked whether it meant he believes Colorado voters were stupid to approve legalization in 2012. The candidate replied that he thinks states should have the autonomy to implement their own cannabis systems and that what he “really” considers dumb is “putting people in jail for marijuana.”

The recording that scandalized his campaign earlier this month also reveals Bloomberg calling legalization a “a terrible, terrible idea.” Critics have expressed particular concern over his claim that 95% of murders and murder victims are black, which Bloomberg said is why police should target those neighborhoods. Racially disproportionate marijuana arrests are a natural byproduct of that policy, he acknowledged.

“It’s telling that, even when he flip flops for political expediency, Bloomberg still finds himself several steps away from being on the right side of history,” Erik Altieri, executive director of NORML, told Marijuana Moment. “Notably, he doesn’t call for legalization, only decriminalization — which was the policy in place in New York City under which he pursued the practice of stop and frisk against countless people of color and arrested over 440,000 individuals for marijuana possession. Mike had a huge trust deficit with voters on drug policy and criminal justice reform and this new plan isn’t going to close that given all the damage he has caused throughout his career.”

While the plan also pledges to “restore student aid access for formerly incarcerated people with drug convictions and remove the question about drug convictions from the Free Application for Federal Student Aid,” it does not include another drug policy reform proposal supported by other candidates: the legalization of safe consumption facilities for illegal drugs, which Sens. Bernie Sanders (I-VT) and Elizabeth Warren (D-MA) have proposed as a measure to reduce overdose deaths.

Bloomberg is also calling for changes such as reforming federal sentencing guidelines, ending cash bail, reducing incarceration by 50% by 2030, helping former prisoners transition back into society and investing in a program to support young men of color.

“Mike will press states to end three-strikes and mandatory minimums laws, which have led to excessive sentencing with consequences that have fallen disproportionately on Black communities,” the plan says. “He will sign a bill repealing those penalties federally and removing the disparity between crack and powder cocaine sentences.”

“Mike’s plan for criminal justice reform will protect people at every touchpoint in the justice system,” his campaign site states. “He will break the cycle of violence and curb police use of force, address injustice in the courtroom and reform excessive sentencing, re-imagine our prisons and focus probation on reintegration, and help people re-enter society with dignity and a renewed sense of optimism.”