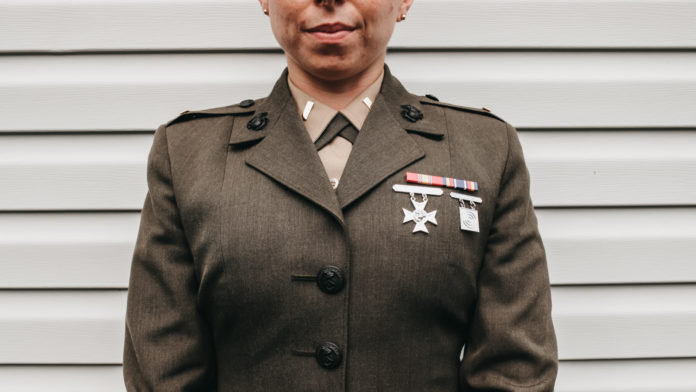 Jeff Staker faced chronic pain after his service in the Persian Gulf in the 1990s.

His doctors at the U.S. Department of Veterans Affairs (VA) relied on opioids to manage that pain. In a recent interview with Weedmaps News, Staker, an Indiana native, said he needed to continually increase his doses to get the same results.

Staker then heard of the potential benefits of cannabis for pain management, but his federal job would be put at risk over marijuana use, even for a medical reason. He was ready to try a different approach and retired from his federal job in 2018, after almost 34 years of service, and started using cannabis to manage his chronic pain.

“It was like getting my life back,” he said. Now 54, Staker said cannabis did not eliminate his pain but allowed him to control it.

Staker has become an advocate for legalization and founded Hoosier Veterans of Medical Cannabis. He’s joined a growing number of veterans and organizations advocating for cannabis’ promise in both pain management and in easing Post Traumatic Stress Disorder (PTSD) symptoms, two conditions a far larger percentage of veterans face than do other Americans. A National Institute of Health study found 65.6% of veterans report having pain. According to the VA, between 11% and 20% of Iraq and Afghanistan veterans deal with PTSD every year, and 15% of Vietnam veterans were diagnosed with PTSD.

But because cannabis is still a Schedule I drug, a classification reserved for the most dangerous substances said to have no useful clinical application, research into its effectiveness is still lacking. This makes it difficult for medical professionals to recommend cannabis for PTSD or anxiety.

“Cannabis prohibition kills veterans,” said Eric Goepel, one of the founders of the Veterans Cannabis Coalition. “That may sound like a harsh way to put it, but it’s the way things are.”

Goepel believes that the VA relies on far more dangerous drugs, such as opioids and antidepressants, to address veterans’ health issues when cannabis could be a useful medicinal tool for veterans. But Goepel argues that the VA and the federal government have an institutional opposition to cannabis.

Lindsay Rodman, the executive vice president for communications and legal strategy at Iraq and Afghanistan Veterans of America (IAVA), said an overwhelming 83% of IAVA’s members support cannabis being legal for medicinal use.

For now, she said, IAVA is pushing for more testing on the effects and effectiveness of marijuana as medicine.

“Once it’s shown to have real benefits, it would be very hard not to give it to veterans,” she said. Rodman spent eight years on active duty in the Marine Corps and remains in the reserves, which means she has never tried marijuana herself. But in speaking to other veterans and from what she’s seen, she believes it has real potential to help veterans. Regardless of the need for more studies, thousands of veterans and others are already using cannabis. They should have the facts.

As far as the VA is concerned, marijuana remains illegal by federal law, which binds its policy.

“Marijuana is illegal under federal law, and until federal law changes, VA is not able to prescribe it,” said Randall Noller, a VA spokesman.

An American Legion survey found overwhelming support for medical cannabis among veteran households, with 92% of responders supporting medical cannabis research, while the Veterans of Foreign Wars organization supports further research as well. The VA says it may research marijuana’s benefits and risks. The IAVA is pushing legislation that would mandate that research take place.

Right now, limited research means there is little hard data on the benefits and potential harms of cannabis, while continued prohibition in many states and at the federal level may mean consequences for users, including veterans, that have nothing to do with its health effects.

For veterans who decide the benefits are worth the risks, there are a few things to keep in mind:

Veterans Cannot be Denied VA Benefits for Cannabis Use

“Veteran participation in state marijuana programs does not affect eligibility for VA care and services,” reads the department website. The VA encourages veterans to disclose marijuana use to their providers. The staff will note a patient’s self-disclosed marijuana use, the VA states.

“VA providers can and do discuss marijuana use with veterans as part of comprehensive care planning, and adjust treatment plans as necessary,” reads the VA’s statement.

Sources interviewed for this story said the reaction from doctors and other medical staff can vary greatly. In states where adult use is legal, most doctors are knowledgeable about cannabis and its effects. It should be noted that sources also said some areas where medical cannabis remains illegal, some veterans have reported a hostile reaction from doctors.

While benefits cannot be denied, treatment plans may, under VA rules. VA staff are not allowed to recommend cannabis for any reason but can consider its reported use as part of a treatment plan.

In some instances, that has led doctors to taper patients off other scheduled substances, including painkillers, or even cut off the supply. Some doctors have a positive response and are interested in understanding their patients’ cannabis use. That’s the best-case scenario, according to Goepel, but the treatment plan is entirely the discretion of the doctor.

Changes are not supposed to be punitive, Goepel stated. But in some instances, he said, staff that is particularly hostile to its use see it as a sign of addictive behavior and restrict access to other drugs.

“We do not want to recommend that veterans are not honest with their health care providers. Unfortunately, there are going to be situations where we would advise veterans to use their best judgment,” Rodman said. Rodman suggests veterans who have a concern about their provider ask for someone different, someone they feel they can trust.

“You need to have a good relationship with your provider,” she said. “I have found that most people that are in the VA system get great care and don’t have complaints.”

Veterans Cannot Possess Cannabis on VA property. Even in the Legal States.

Regardless of whether veterans are in a state with laws that make cannabis use legal, they cannot bring it to any VA property. According to the VA website, the “use or possession of marijuana is prohibited at all VA medical centers, locations, and grounds. When you are on VA grounds it is federal law that is in force, not the laws of the state.” This makes it difficult for veterans who decide to use cannabis medicinally to discuss with VA physicians without putting themselves at risk of being punished by federal law.

“If you’re on federal property with marijuana, you’re in violation of the law,” Goepel said. That’s true in adult-use states like Colorado and California. “It’s obviously a huge pitfall for some veterans.”

The VA will not Recommend Cannabis. Or Help Pay for it.

In states where marijuana is legal for medical use, the high cost can become a big obstacle. In New Jersey, for instance, access to the medical marijuana program requires a recommendation from a doctor, and cannabis itself is relatively expensive.

For veterans who rely on VA doctors and prescription coverage, those costs may be out of reach, even if there is evidence that cannabis may be more helpful than the medicines currently covered.

Goepel’s group is supporting the Veterans Medical Marijuana Safe Harbor Act, a bill that allows veterans to legally use and possess medical marijuana and discuss its use for medical treatment with a VA physician.

There may be Other Consequences

Sources interviewed for this story mentioned that a disproportionate number of veterans hold jobs that involve regular drug screening, with the federal government or with law enforcement. The VA states that its employees are subject to regular drug testing under their terms of employment.

Even those following all of the rules of their state’s medical cannabis program can be fired or disciplined. There are other risks, Goepel said. A job in the cannabis industry, even at state-licensed operations, can disqualify veterans for VA home loans, and firearms permits.

How to Talk to Your Doctor About Cannabis Use

What Travelers Need to Know About Flying with Weed