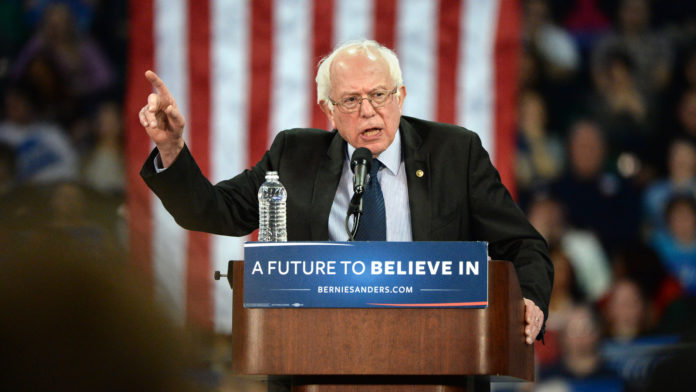 Sen. Bernie Sanders (I-VT) is pledging to use executive action to deschedule marijuana within the first 100 days of his administration if he is elected president.

In a cannabis reform plan released last Thursday at 4:20 PM EST, the 2020 Democratic presidential candidate said removing cannabis from the Controlled Substances Act would be the first step, but that he’d simultaneously press Congress to make legalization a permanent policy through legislation.

The senator said he will nominate an attorney general, Drug Enforcement Administration administrator, and Health and Human Services secretary, “who will all work to aggressively end the drug war and legalize marijuana.” Once the attorney general is confirmed, Sanders will issue the executive order to deschedule cannabis.

Sanders, who became the first major presidential candidate to endorse legalization during his last campaign and filed the Senate’s first-ever cannabis descheduling bill in 2015, is expanding on his vision for what a legal cannabis model should look like.

When we said four years ago that we needed to legalize marijuana, it was considered a “radical” idea.

Today, 11 states plus DC have legalized it. Not so radical anymore.

When we’re in the White House we will do so nationwide.

“It is time to admit the criminalization of marijuana was a disaster, especially for communities of color, and allow those most impacted to move forward with their lives,” the plan states. “Our job now is to legalize marijuana and vacate and expunge past marijuana convictions, and ensure that revenue from legal marijuana is reinvested in communities hit hardest by the War on Drugs.”

There are several unique proposals included in the new plan. To mitigate the influence of large corporate marijuana firms, the senator wants to enact market and franchise caps. Tobacco companies would be prohibited from participating in the legal industry.

“Big Tobacco is already targeting the marijuana industry for its profits,” the plan reads. “As president, Bernie will not allow marijuana to turn into Big Tobacco.”

Additionally, Sanders said the government would provide resources “for people to start cooperatives and collective nonprofits as marijuana businesses that will create jobs and economic growth in local communities.”

Today, the government considers marijuana as dangerous as heroin.

As president I will immediately issue an executive order to declassify marijuana as a controlled substance.

People who’ve been incarcerated for cannabis offenses or who are from communities that have been disproportionately impacted by the drug war would be prioritized to benefit from legalization under the senator’s plan. That includes reinvesting cannabis tax revenue into such communities, setting aside $20 billion in grants to provide access to capital to marginalized individuals and stimulating business in areas hit hardest under prohibition.

The plan also calls for the creation of a $10 billion grant program under the U.S. Department of Agriculture (USDA) to help marginalized individuals start rural and urban cannabis farms “to ensure people impacted by the war on drugs have access to the entire marijuana industry.”

“These grants will be used for design, technical assistance, purchasing equipment, installing infrastructure and more,” the plan says.

Sanders also wants to establish a national system to certify organic marijuana “to give consumers the information they need to make an informed decision” and to ensure “marijuana farmers are paid a fair price for their products with tools like supply management and reserves and transition toward a parity system to guarantee marijuana farmers a living wage.”

USDA would also be involved in establishing “safety inspection and quality control processes for growers and producers.”

Too many lives were ruined due to the disastrous criminalization of marijuana. Today I am releasing my plan to:

✅ Legalize marijuana with executive action
✅ Expunge past marijuana convictions
✅ Invest in communities most affected by the War on Drugs https://t.co/0xQSHn6F3U

Another provision concerns expungements, and it is modeled after California’s cannabis program. Sanders will order federal and state law authorities to review data on marijuana convictions and then clear the records for those cases. Individuals would be able to reach out to their state governments to ensure their case is being reviewed, and if after two years there’s no action, the plan would provide an “administrative remedy.”

It’s not clear what powers the senator would have to direct state action with respect to the cannabis conviction review proposal, but it’s possible it would involve withholding certain federal funds to penalize states that don’t comply. Sanders also wants to proactively provide funding for states and cities “to partner with organizations that can help develop and operate the expungement determination process, much like how California worked with Code for America.”

The senator said he would also “revitalize” the clemency process by creating an independent White House clemency board that would presumably help streamline the identification of eligible federal marijuana cases.

Legalize marijuana. Expunge past convictions. End the War on Drugs.

Further, Sanders said he would eliminate drug testing requirements for individuals applying for or receiving public benefits, and he’d ensure that people don’t lose federal housing assistance over cannabis. Under the plan, immigrants would not be denied entry to the use or face deportation because of marijuana.

“The legalization of marijuana is a once in a lifetime opportunity to get federal policy right from the start,” Madisen Saglibene, executive director of Nevada NORML, said in a press release. “The plan released today by Senator Sanders would end prohibition and address the harms that have been inflicted on generations of Americans under its racially disproportional enforcement.”

“His plan would provide real economic prosperity in the emerging legal marketplaces for those who have had to carry the burden of incarceration or a criminal record due to a substance that is now legally generating millions in Nevada each year,” she said.

This latest proposal builds on a criminal justice reform plan Sanders released in August. That plan also called for legalization, expungements and reinvesting in communities most hurt by the drug war. And it included the establishment of safe consumption facilities where individuals could use illicit drugs under medical supervision to prevent overdoses and encourage people to seek treatment.

But while Sanders is a longstanding champion of marijuana reform and advocate for harm reduction programs, he’s declined to back broader decriminalization of drug possession, a stance being taken by a growing number of his rivals for the Democratic nomination. During an interview on Joe Rogan’s podcast in August, the senator pushed back against arguments in favor of legalizing and regulating drugs besides marijuana.

He congratulated Canada last week on the first anniversary since the country implemented a legal cannabis market, stating that “Vermont shares a border with Canada, and as far as I can tell, the sky has not fallen and the cities have not plunged into anarchy on the other side.”