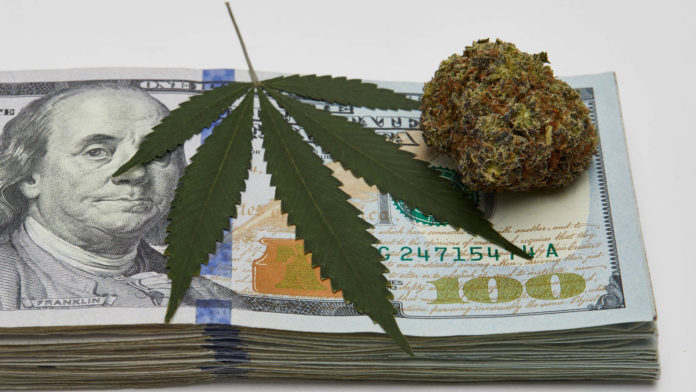 It’s a rare problem with no easy solution: U.S. cannabis businesses are forced to operate in cash, but they can’t access banking services and, often, neither can their customers.

Because the federal government still considers marijuana a controlled substance, banks back off from accepting deposits or other services, fearing they’ll run afoul of federal banking regulations.

In some states, even hemp growers and cannabidiol (CBD) manufacturers are being dropped by banks and credit card companies for their unresolved legal status. Payment workarounds and cash-based operations are the only options for some small companies.

As a result, some cannabis companies have resorted to questionable and illegal ways of dealing with this thorny issue. They may use offshore processing companies and hire  sales groups to represent those companies. Some use debit card processing and cashless ATM vouchers in which the money is transferred electronically and a receipt is issued. Other options include stored-value cards (also called money-loaded cards) to try to sidestep restrictions, according to Tyler Beuerlein, Chairman of the Banking and Financial Services Committee for the National Cannabis Industry Association. He noted that it usually doesn’t end well for them.

Branded card networks forbid use for cannabis purchases; most debit cards are connected to them, making their use also verboten. Banks and credit unions don’t allow ATMs connected to them to be used for weed; instead, they require a third-party service. Financial institutions are subject to penalties and fines for illegal activities, and officers can even be held personally liable.

Recently, in a clash of cannabis titans, one major marijuana company sued another,  alleging wire fraud, bank fraud, and criminal fraud by its competitor to gain “an unfair competitive advantage in the California cannabis delivery market.” Plaintiff Herban Industries, whose parent company DionyMed is based in Canada, sued Eaze Technologies, a California-based cannabis industry delivery company, for operating what it claims is an illegal credit and debit card transaction system.

According to the lawsuit, “…Eaze conspires to disguise the cannabis transactions as transactions for dog toys, dive gear, carbonated drinks, drone components, and face creams, among other things, to obtain approval for these transactions.” The deception constitutes fraud, the lawsuit contends, which is conducted through shell companies in Cyprus and the United Kingdom.

It further asserts: “To ensure that the payments sent back to the retailers (and by extension, Eaze) are not flagged by Payment Card Companies or other financial institutions, Eaze ensures that they are transferred between and among various overseas entities, converted from U.S. dollars into euros, and then returned to the United States in euros from an entity based in Gibraltar called Spinwild, with which none of the retailers has ever actually done business. Further, Eaze executives used encrypted messaging programs to direct dispensaries to create phony invoices to Spinwild to create an ‘audit trail’ in the event of an inquiry from the banks.”

The case demonstrates just how dangerous the threat of claims of illegality can be, according to Katy Young, Managing Partner at Ad Astra Law Group in San Francisco. A discovery period, in which companies must provide sensitive information about operations, could be damaging, especially if either company takes risks.

“The parties are both very sophisticated and I’ll bet they’ll enter a protective order that would not allow information to be released to the rest of the world,” Young said. “I don’t know if the court will grant it or not, but I’m sure they’ll ask. Anyone is a target because of their success. There’s a famous rap line, ‘mo’ money, mo’ problems’ and it’s absolutely true in the cannabis industry. Certainly, anyone who’s a market leader is going to be a target in this industry.”

To seek a financial solution for cannabis dispensaries in Arizona, where medical marijuana is legal, the state’s Republican Attorney General Mark Brnovich welcomed an intermediate financial technology, or fintech, company called Alta into its “regulatory sandbox” of entities allowed to test innovative financial products and services without full state licensure. Alta and its FinTech Sandbox operate as a private financial services club of sorts that provides digital currency for licensed medical cannabis providers and vendors. Members transfer cash for tokens, with $1 equal to one token. Members can pay each other using blockchain technology.

“There’s a cash problem in our industry and we hoped it would be solved by the traditional banking industry — so until it’s solved, we support the FinTech Sandbox,” said Tim Sultan, executive director of the Arizona Dispensaries Association. “It’s a great thing for innovation and it checks all the boxes.”

Sultan said the trade group typically doesn’t endorse any industry business and declined to do so when Alta approached it. After a second request, however, the association checked with its members and a majority were supportive of Alta’s request to write a letter to the Attorney General’s Office endorsing the establishment of the service for their benefit.

“We feel the real solution is descheduling marijuana and the next best step is passage of the SAFE Banking Act,” Sultan said, calling the service a “stopgap” solution for dispensaries. The Secure and Fair Enforcement (SAFE) Banking Act would allow financial institutions to handle money from cannabis businesses in states where medical or adult-use marijuana is legal.

“We could have used this seven years ago,” said Downing.  Companies that use third-party services are sometimes charged 15% to 20% service fees.

While each transaction cost ranges from 2% and up, banks and credit unions also charge fees of anywhere from $175 to $5,000 per month on accounts to cover regulatory costs incurred in serving cannabis-related clients, Beuerlein said.

Other services that work with the industry include transaction service Cannapaid in Los Angeles, Dama Financial in San Francisco and Hypur, based in Scottsdale, Arizona. Hypur is an app that transfers money directly from the consumer’s account to the vendor. Hypur’s clients are banks and credit unions that work with the cannabis industry, among other nontraditional clients. The company is expanding nationally after operating on the West Coast for more than five years.

Cryptocurrency and Other Workarounds

The NCIA’s Beuerlein, who is also Executive Vice President of Business Development for Hypur, said that most large cannabis-related companies have banking affiliations, despite perceptions otherwise. However, banks don’t publicize those connections and it may be hard to find them without an intermediary. He doesn’t think a nontraditional solution will solve most cannabis vendors’ problems.

“(Cryptocurrency is) an added step that creates an additional compliance problem for any institution,” Beuerlein said. “They have to register as a money transmitter in the states they operate. And again, cryptocurrency by itself is a highly regulated currency industry to bank in — an extremely regulated industry and you’re compounding that by trying to regulate both areas.”

Beuerlein said fewer than 40 banks and credit unions work with cannabis companies on a large scale and Hypur represents half of them.

Meanwhile, in some states, customers are still grappling with the workarounds and the gymnastics that cannabis businesses perform to buy and sell with some ease. Debit and credit card receipts may bear names of companies with no seeming relation to the dispensary or delivery company, and those names can change frequently.

As for Eaze and Herban Industries, on Sept. 11, 2019, a San Francisco Superior Court judge declined to dismiss the lawsuit at Eaze’s request. Instead, Herban may move forward on discovery, gaining access to Eaze business records. Michelle Sitton, Chief Marketing Officer, declined to comment on the case, saying that it is an “ongoing legal matter.”

DionyMed’s CEO Edward Fields said in a press release about the pending litigation:

“We are pleased with the court’s decision to allow our lawsuit to proceed. We will continue until the direct-to-consumer cannabis delivery playing field is level for all market participants, and Eaze has compensated DionyMed for the massive damages its conduct has caused our company and shareholders.

“This result puts the boards of directors of cannabis companies everywhere on notice that good governance and regulatory compliance are table stakes for participation in the hyper-growth cannabis market.”

The battle between Eaze and Herban represent just one of the clashes at all stages of the cannabis legalization movement. However, pending legislation may go a long way toward preventing the shady legal workarounds that plague the industry.

In a notable move on Sept. 25, 2019, the House of Representatives passed the SAFE Banking Act by a vote of 321-103, the first stand-alone reform bill that would protect banks that service the cannabis industry, and allow them access to legal financial services. The bill has yet to be approved by the Senate.

Feature Image: Until Congress passes legislation to allow financial industries to conduct business with the cannabis industry, entrepreneurs are turning to financial technology solutions to accommodate non-cash transactions. Some are even turning to offshore businesses that illegally mask card-based transactions and move funds around worldwide.  (Gina Coleman/Weedmaps)