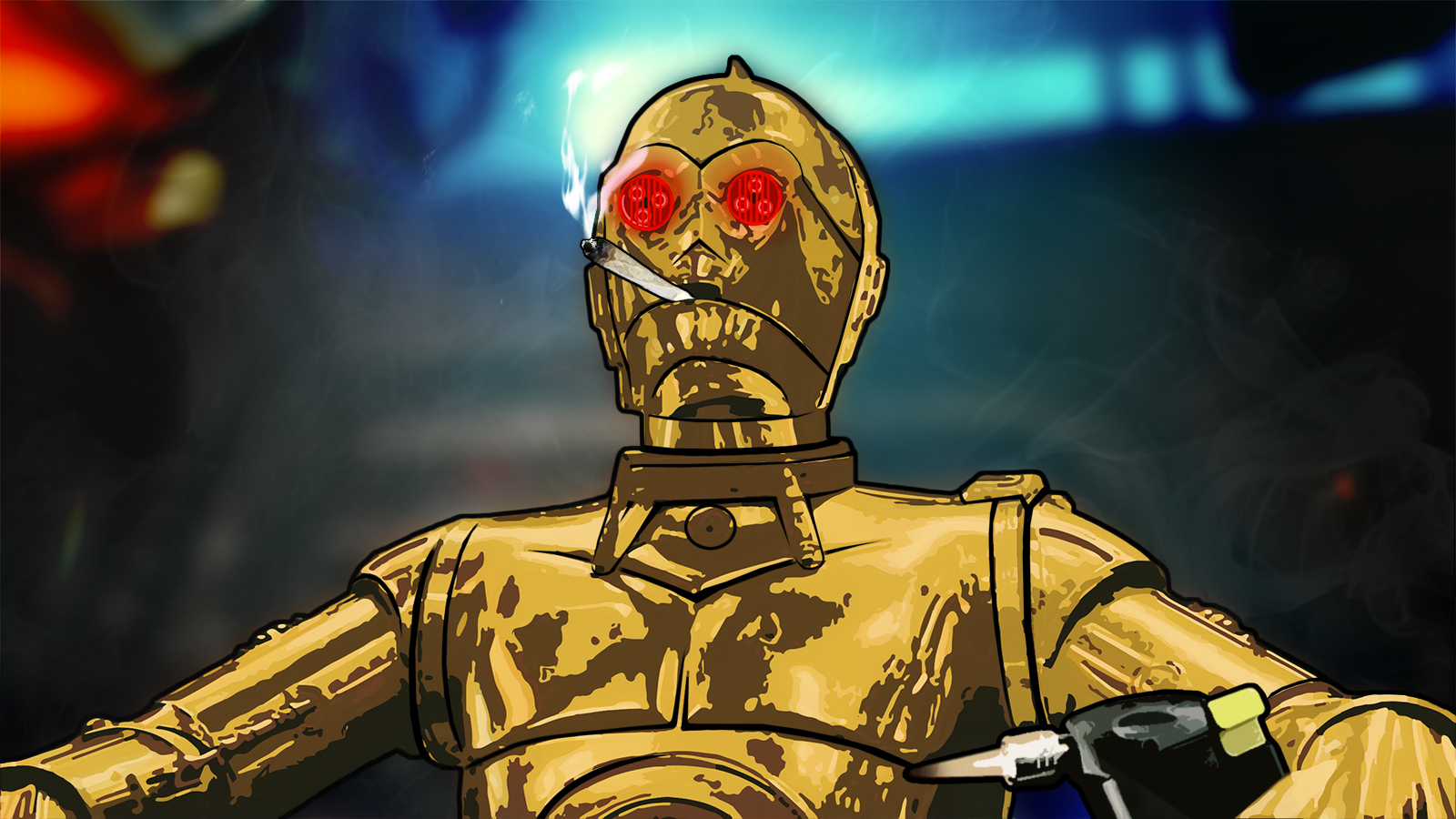 Oddly enough, it’s one of the burning questions to come out of Disney’s 2019 D23 Expo over the weekend that the House of Mouse didn’t see coming.

But only a day after the event, Twitter was flooded with a screenshot from the “D23 Special Look” footage for “Star Wars: The Rise of Skywalker,” of C-3PO with glowing red eyes (you’ll find it at the 1:25 mark).

And though the “Rise of Skywalker” footage presented a number of other viral moments —  including the voice of longtime franchise baddie Emperor Palpatine and a glimpse at what the Internet is now calling “Dark Rey” — it was the red-eyed-3PO screenshot that set Twitter ablaze with the unavoidable notion that everyone’s favorite pissy protocol droid was just high AF.

What Went Down at D23

The D23 Expo is Disney’s biennial three-day fan event, essentially the company’s own Comic-Con, held this year at the Anaheim Convention Center in California, near the company’s world famous theme park complex, from Aug. 23-25. With “Star Wars,” Marvel, and the recently acquired 20th Century Fox now under its ownership, the Walt Disney Co. had plenty of content to hype up to fans in attendance.

In addition to a trailer for “The Mandalorian” (Disney’s first live-action “Star Wars” series set to premiere on the company’s Disney+ streaming service), the cast reveal for the upcoming Marvel film “The Eternals,” and even a panel for the newly-acquired Fox property “The Simpsons,” the Expo treated attending fans to a “special look” at the final episode of Disney’s “Star Wars” sequel trilogy.

If you were following D23 that weekend, before the “Rise of Skywalker” footage was released online, you probably saw the initial reports coming out of the Convention Center about an exciting shot of Rey, the sequel trilogy’s hero, looking full Sith Lord in a dark cloak, wielding a double-bladed, Darth Maul-esque red lightsaber. Will Rey really turn into the dark side in Episode 9? Is there a Rey clone? Is this some sort of vision? These were the questions coming out of D23 until the following Monday, when the “Rise of Skywalker” footage was released to the public and the red-eyed 3PO was unleashed on an unexpecting legion of fans on Twitter.

A compilation of old footage from the previous films and previously unseen footage from the upcoming “Rise of Skywalker,” the “Special Look” video seems designed to do two things: Sell the film as a legitimate conclusion to George Lucas’ entire “Star Wars” saga, and generate internet hype with some choice clickbait imagery (e.g., “Dark Rey”). The red-eyed C-3PO was surely meant to spark viral interest as well, and many fans took the bait, wondering whether the mild-mannered robot had turned to the dark side as well.

Then a sea of folks inevitably put two and two together and postulated that C-3PO hadn’t broken bad, but was just “reaaallly high,” “high af,” “high as shit,” or “blit out of his mind.”

Bruh are you guys sure C3PO isn’t high? pic.twitter.com/L3qqqfGPYl

Even Jimmy Mac, co-host of the family-friendly “Star Wars” podcast “Rebel Force Radio,” pointed out that our current wave of weed legalization may finally have touched the far reaches of space.

Bloodshot. Weed is even now legal in a Galaxy far, far away. #StarWars #TheRiseofSkywalker pic.twitter.com/3c7Di7F3hn

And That’s When C-3PO Knew … He Was Memed

These days, it seems you just can’t be seen on the internet with red eyes without people saying you’re high as fuck — even if you’re a harmless golden mechanical man from one of the most wholesome pieces of intellectual property ever, now run by the largest family entertainment company in the world. It’s a mini-hot girl summer of the week, and weed has never been a more powerful cultural force to be reckoned with.

But is Lit C-3PO here to stay? Do we have a new weed meme with staying power on our hands? Only time will tell. But in the immediate aftermath of THC-3PO, or CWeed-PO, or CBD3-O, or whatever you want to call him — it’s comforting to know that, as we enter the post-Disney-takeover age of media, weed has also entered the public consciousness enough to turn a beloved, uptight robot into a stoner icon — if only for the relatively short lifespan of a viral tweet.

Andrew Yang is optimistic about marijuana legalization with Biden as president