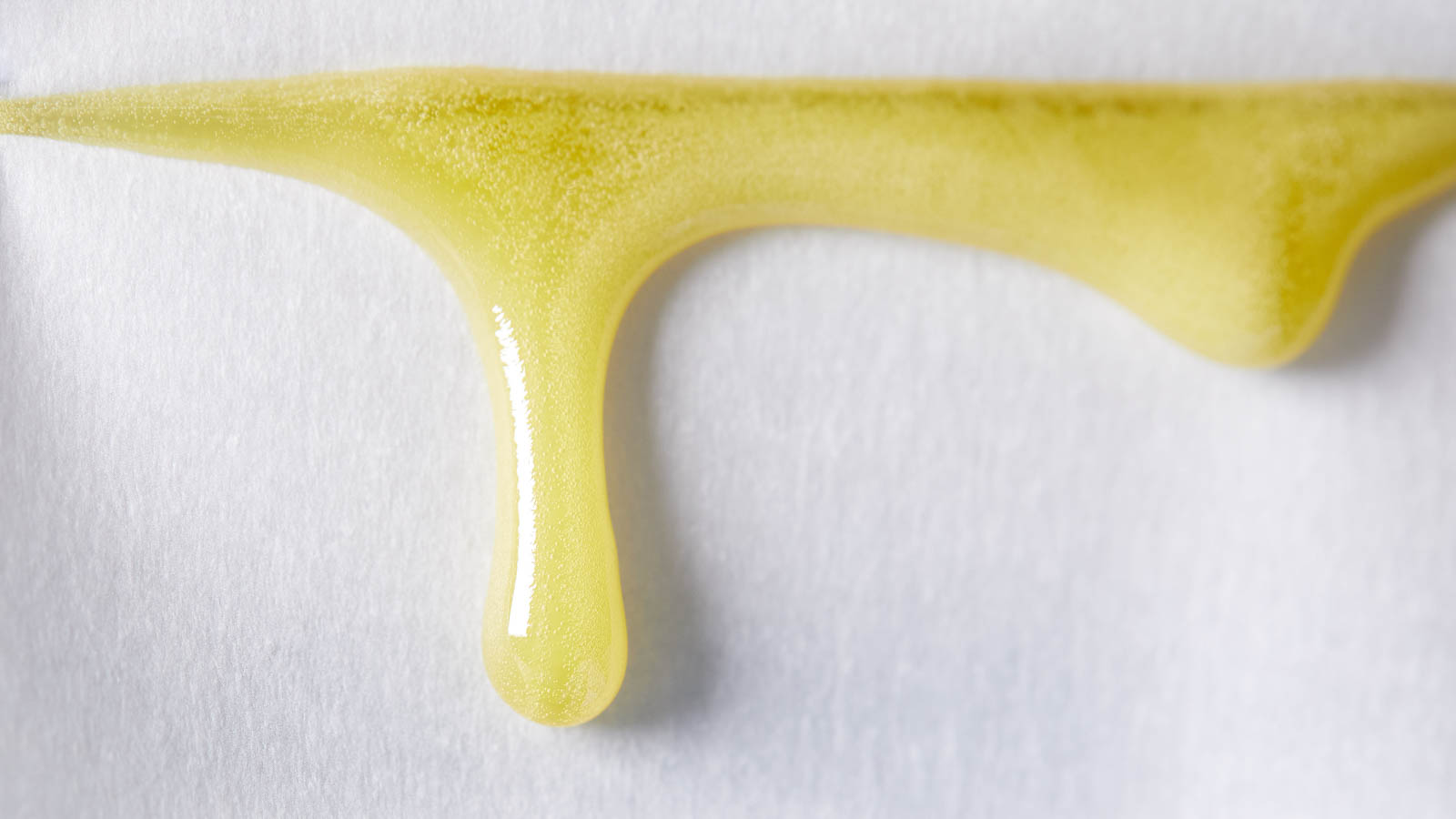 When it comes to concentrates and extracts, there are many options to choose from. Bubble hash, dry sift, butane hash oil (BHO)-based shatter and badder … all these concentrates have their own strengths and weaknesses. For the purist, however, there’s rosin.

Rosin is created using only heat and pressure with methods that have been utilized for thousands of years on various food and beverage products. Without a need for expensive equipment or special rooms that are designed for extraction, rosin can be made in almost any setting. And for those who enjoy taking a hands-on approach to what they consume, rosin offers an opportunity for a true craft cannabis experience.

“It’s been a really integral part of my life, my entire life,” Carbone said. “Back then it was like, you gotta take it into your own hands if you’re doing it yourself and you can’t go to a store and buy what you need.”

Rosin, as a method for concentrating active compounds from plant material, has been around for decades, but it was Phil “Soilgrown” Salazar who applied this technique toward cannabis in 2015. Salazar began sharing photos of his rosin experiments on social media and discussing his techniques with the cannabis community, which quickly popularized the technique and inspired others to try it out.

Within the year, rosin makers were able to produce concentrates that rivaled the best extracts on the market. Most of this success was due to rosin enthusiasts who developed solutions to improve their craft and shared those solutions via word of mouth and online forums, then onto social media and in commerce. As a result, hobbyists of any experience level can enjoy the craft of pressing rosin.

“The product has just gotten much better,” Carbone said.

Rosin products have since become a major staple in dispensary menus, and for good reason: Rosin is one of only a few completely solvent-free ways to make cannabis concentrates. It’s also relatively safe to manufacture at home by taking a few precautions similar to those you would take when curling your hair or working with pliers. Rosin is made with the simple combination of heat and pressure, so keep your hands out of the way to avoid injury.

“Rosin compared to some of the other products as far as concentrates on the shelf I would say has an advantage,” Carbone said. “One, because it’s a completely solventless technique. Two, because it gives a good snapshot of the terpene profile of the original genetics that it came from.”

While other extraction methods can result in solventless concentrates, technicians must take additional steps and safety precautions to remove residual solvents before products hit dispensary shelves. Rosin pressing offers people at home the ability to take a mostly safe, hands-on approach to extraction that’s not possible with the use of volatile solvents that can ignite or explode if handled improperly.

For the home-crafter looking to make a minimal investment, rosin can be pressed using a flat iron or hair straightener. Those who wish to have more control may opt for a small home press, while dedicated enthusiasts and commercial producers will invest upwards of $1,500 — sometimes tens of thousands of dollars — for professional-grade hydraulic presses.

How to Tell if Your Rosin Yield is ‘Good’

You can generally tell if your rosin has plant material in it if you see small green specks or by the color and consistency. While it’s not necessarily a bad thing to have some plant material in your rosin, those seeking the purest, most potent, and most flavorful dabs are looking for less or none at all. This is why starting with dry sift or water hash is preferred by many rosin makers producing for the commercial market.

All solventless concentrates are judged by a six-star rating system. This includes rosin. When you expose your rosin to heat, it should bubble. The amount of bubbling and residue left behind after heating a dab of rosin indicates the star rating. Leftover plant material is likely to reduce the amount of bubbling, but remember, a little plant material isn’t necessarily a deal-breaker.

The lowest solventless concentrate ratings are 1 and 2, which will have very little bubbling with dark residues. Concentrates with this rating can be used in food and can be dabbed, but with likely a less pleasant experience. They may be harsh and less flavorful than their higher-rated counterparts.

Most homemade and some commercial-grade solventless concentrates fall between 3 and 5 and, in general, can be expected to result in flavorful, potent dabs.

A star rating of 6 is the highest, as well as the hardest to produce. Generally, only concentrates made with the highest-quality starting material and the most exacting methods will receive this rating. Rosin with this rating will bubble vigorously when exposed to heat and should leave little to no residue. This is why 6-star rosin is the top choice for any avid dabber.

A Matter of Product Purity

In the end, people’s love for rosin comes down to purity. Aaron Rubin with Long Beach, California-based BelCosta Labs took samples at each phase of the rosin-making process during a visit to Rosin Technologies in Irwindale, California, to see how rosin making is done.

For those in search of the most pure dab — pressing rosin is a labor of love that requires patience and attention to detail.

Why would different starting materials result in different potencies? And what does that have to do with purity? Well, the answer lies in the quality of the starting material and the likelihood of plant material making its way into the rosin while it’s being pressed.

Since rosin is a product of squeezing the components within a trichome gland into an oil, the more large, fresh and robust trichome heads you can collect and the more plant material you can sift out before pressing, the better.

Using screens or rosin bags provides an additional layer of protection against plant materials seeping into your rosin. In short, trichomes range from 20-125 microns. Screens and bags come in micron ranges, which indicate the size of the material that will move through its fibers.

The most potent and purest press of the Rosin Technologies visit came from the fresh frozen water hash, which started at 78.53% total THC and ended with 85.39% THC in the final product. The trim used to make the water hash was frozen and washed into hash directly out of the freezer.

This lack of plant contaminants in the final product is due mostly to the purity of the starting material. Fresh frozen hash is the result of sifting trim, buds, or a whole plant that’s been frozen directly after harvest.

The kief pressing process started with a bag of dry Afghani trim that was processed through a commercial-grade pollen collector with crushed dry ice to produce a thick collection of trichome heads that tested at 54.35% total THC and had a minimal amount of plant impurities.

“The first tumble, I try really hard not to beat up the material because it’s leaf to kief, kief to rosin,” Carbone said as the tumbler spun. “If the (trichome) heads are big and they’re shiny … even if it has these big green specks, if it’s still shiny, then it will press better … it’s the oil in the big heads that we’re going after.”

Knowing you have quality kief is as simple as holding a lighter near a small corner of the pile. If it bubbles when the lighter gets close, you’ve got high-quality kief that’s optimal for pressing. If you don’t have a lighter handy, try squeezing a small amount of kief between your fingers. The trichomes will pop under the pressure and stick together.

The Afghani kief was then placed into a parchment-lined mold, formed into a puck in a pre-press before being placed into a mesh envelope and pressed into rosin. The resulting rosin contained 80.48% THC and did not contain any green specks.

The cured Afghani flower was processed by breaking up and placing the plant material into a parchment-lined mold, which was placed in a pre-press that shaped it into a puck. The puck was wrapped into a mesh envelope, placed in parchment paper, and pressed into rosin.

The cured flower tested with a total THC content of 24.6% and produced rosin that contained 78.11% THC.

Whichever starting material you choose, practice makes perfect. If you want the best, you must invest the time and effort into mastering your craft. It takes just the right amount of heat, pressure and time to get the most out of pressing rosin. Every factor has an impact on not only the success or failure of the press, but also the quality and quantity of the resulting yield. Once you’ve dialed in the formula that works for you, it’s a matter of repetition and refinement.

Thanks to the work of craft concentrate makers, prospective pressers now have the opportunity to follow some solid blueprints. In the end, making rosin at home is a matter of getting as fresh, trichome-rich starting material as you can get your hands on, finding your formula and enjoying the fruits of your labor while refining your process.

If you’re interested in learning more about how to make your own rosin using a hair straightener, check out this video on How to Make Rosin. For those who want to dive deep into the mechanics of rosin pressing, visit Weedmaps Learn for more information.

How Does Cannabis Use Affect Glands and Hormone Production?

The Internet Can Be Tough for Stoners. Arend Richards Can Attest.