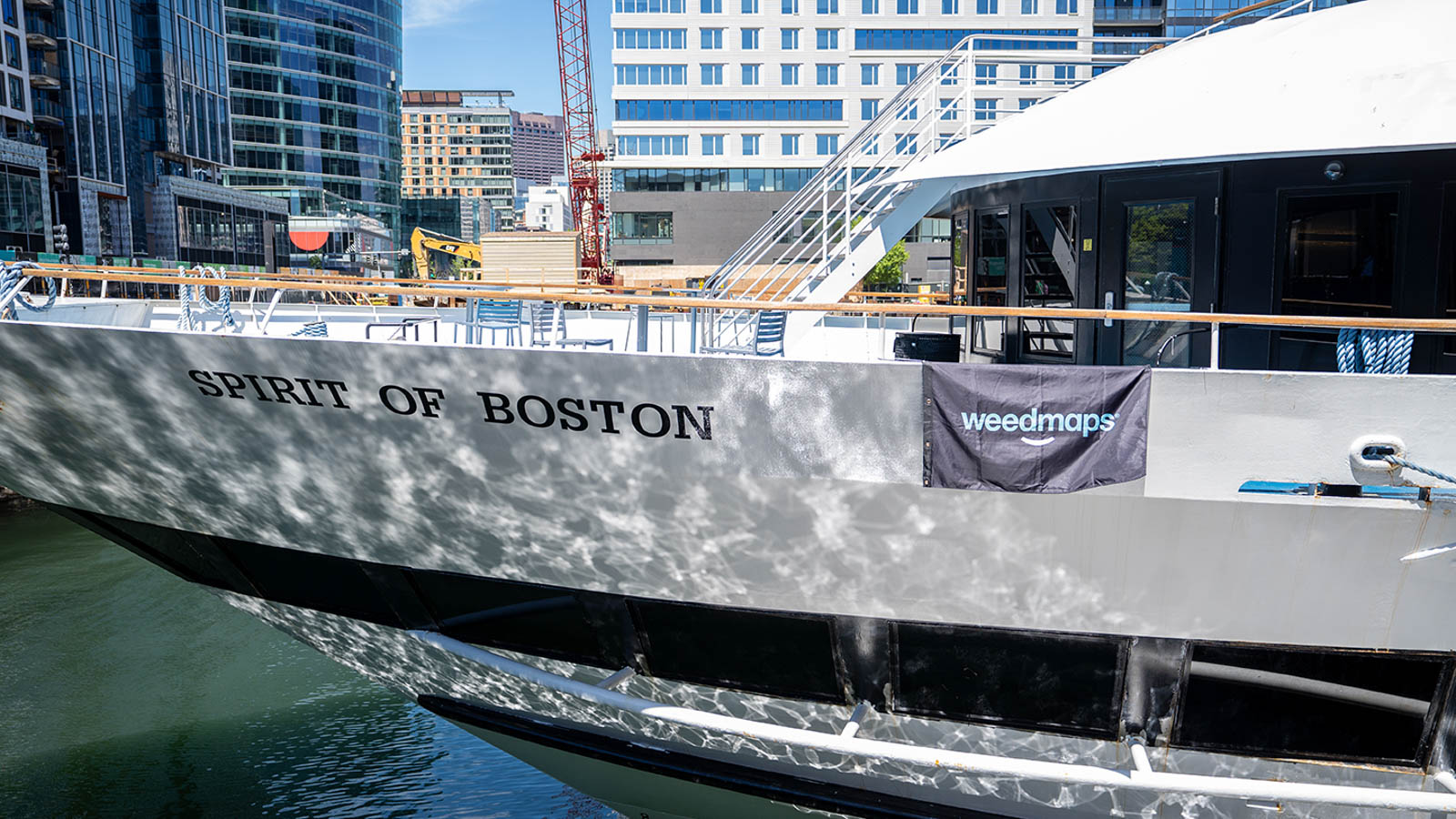 Spending Memorial Day weekend on the water is a no-brainer. And as far as aquatic locations to throw a party, you can’t do better than Boston Harbor, the site of the Boston Tea Party, a place loaded with symbolism. Today, another revolution is brewing across Massachusetts in the form of a booming new adult-use cannabis market, with retailers opening their doors from Pittsfield to the coast.

To celebrate, Weedmaps held it’s own “Tea Party” on May 26, 2019, by the name of the Boston Kickback. It was for cannabis’ Continental Army: the budtenders.

Brendan*, who had just turned 27 a few days prior, works as a budtender at Curaleaf medical dispensary in Oxford. He waited in line with two of his fellow employees after their names were drawn from a hat by their assistant manager. The three made the hourlong drive to the Boston Kickback to board the Spirit of Boston for a cruise around the harbor. Along with food, drinks, and intimate performances from artists such as Lou Banga (a.k.a. A$AP Lou), the party was organized as an opportunity for budtenders to connect with brands from across the state.

“It’s a giveback,” Weedmaps Lifestyle Director Joy Claire said. “It’s our first event in this market, so we wanted to go really big and make sure everybody had a good time. We brought a little bit of Cali to Boston.”

As the Spirit of Boston pulled out towards the Harbor Islands, guests on the sun-soaked top deck took selfies with an inflatable Weedmaps spliff. Industry movers and shakers discussed the price of a pound of bud like it was a global currency, and whether the ship could in fact be considered a yacht.

“I think it’s better than a yacht,” someone said.

Downstairs on the first floor, Kate Steinberg from Curaleaf was talking to attendees about the company’s line of hemp products. As Outreach Manager and Education Coordinator, Steinberg speaks to senior and medical groups across the state, organizing events such as blood drives, and trying to engage communities around health, elder care, and cannabis.

At the next table, budtender Alexandra Twomey and her colleague Brett Boyer were representing Sanctuary Medicinals, a medical and recreational facility in Gardner. They handed out tiny cups of chocolate covered peanut butter puffs that seemed to have the unmistakable aroma of a medicated edible, but everything at the table was THC-free, Twomey explained. The Spirit of Boston was sailing on federal waters, after all.

Wild Times in the Bay State

To be in Massachusetts cannabis industry in 2019 is an exciting prospect, especially if you’re a budtender. The staff at Sanctuary Medicinals have noticed different patterns in the preferences of their many patients and adult-use customers, and sometimes the most popular items on their shelf are the most unexpected, like old-school pressed hash.

“Sanctuary brought the hash back,” Boyer said. “All the OG pot smokers are really raving about the hash. It’s dry sift.”

But they’re also making use of some more forward-thinking trends in the realm of vape cartridge technology, and believe that preserving terpenes of the source material can affect the flavor and high of their product in a positive way.

“Not many people are using liquid shatter when it comes to cartridges. They’re using distillate, shooting for high THC,” Boyer said. “With liquid shatter, we keep all the natural plant-based terpenes. We describe it as the ‘not-from-concentrate, concentrate theory.’”

Revolutionary Clinics, which operates two medical dispensaries in Somerville and Cambridge, showed off its I am Edible line of infused lozenges, honey, and spreads. Marissa*, Revolutionary Clinics’ General Manager of the Cambridge location, said that the edibles offered a level of discretion and consistency of dosage that made them some of the most valuable in the Revolutionary Clinics portfolio for patients.

For Marissa and others, the burgeoning new industry in Massachusetts presents them with opportunities that are rewarding both in terms of future career development prospects, and also in how they relate to their surrounding community. After working in child care, Marissa found herself at a career crossroads. She entered the cannabis industry to pursue her interest in health and well-being, and fulfill a desire to help others.

“I did some education at the Northeastern Institute of Cannabis, so I got a little bit of solid foundation under me. I became a packaging assistant, then a budtender, and then a manager.”

Massachusetts legislators were slow to roll out the adult-use market. One consequence of the new environment has been a newfound emphasis on professionalism, and the creation of a new breed of industry professional that takes their role with the utmost seriousness.

Increasingly, they’re gaining recognition for being skilled at what they do. One of them is 32-year-old Greg Boerman, an employee at Revolutionary Clinics in Cambridge. Boerman prefers “patient advocate” to budtender, and he is knowledgeable about other intricate details around the business and perception of cannabis retail. For example: the built environment of a cannabis retail space, and how it informs the patient-dispensary relationship.

“I think it’s important for dispensaries to have a feng shui,” Boerman said. “I’m very much against lines, because when I’m helping someone, the next person in line is going to be staring a hole in their head. Even if we’re having a casual conversation about cannabis my job is to educate them, and give everyone the same attention coming there. I’m not going to rush someone.”

It was a sentiment that staff from Revolutionary Clinics, Sanctuary Medicinals, and Curaleaf repeated throughout the day: It takes time to feel out a patient’s needs and do their job the way they need to. The work of retailers is now to get cannabis to people who truly need it, and they’re going to great lengths to make sure that happens.

“The cool thing I’m starting to see in the industry is people doing generous discounts for disabled veterans, offering things where the government is falling behind,” Boerman said.

*Only first names have been used at the individuals’ request.

What Current Research Tells us About Cannabis and Fibromyalgia

Sanders doubles down on legal weed. Bloomberg worries about the lack of science.