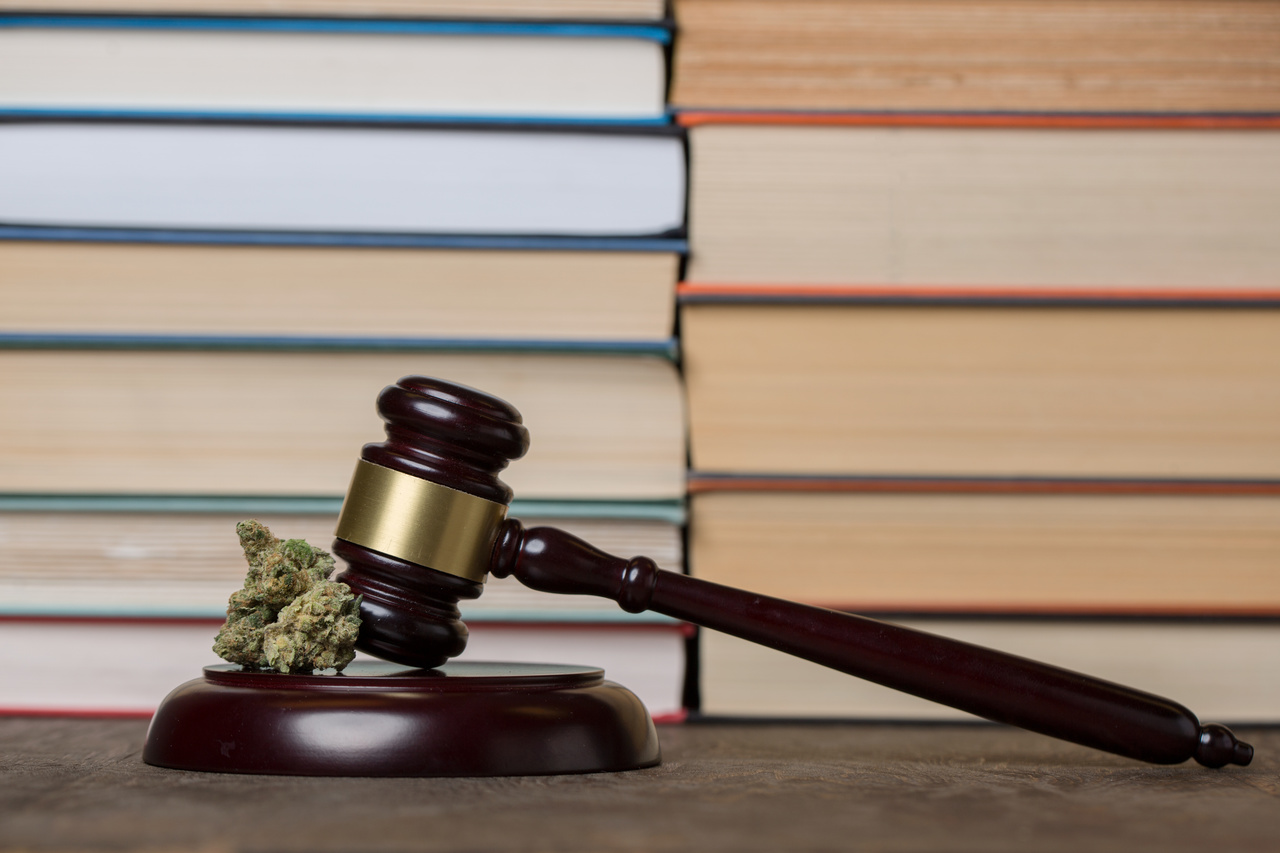 Marijuana is now a taxed, regulated and accepted industry for more Americans, but as far as the federal government is concerned, it remains illegal. As a result, users, patients, medical professionals, and the fast-growing cannabis industry grapple with uncertainty.

Some in Congress have put forward a potential solution.

In a harshly partisan moment in Washington, D.C., Republicans and Democrats have joined to introduce S. 3032 the STATES Act, short for Strengthening the Tenth Amendment Through Entrusting States. The final amendment in the Bill of Rights of the U.S. Constitution, the Tenth Amendment reserves the powers not specifically prohibited or given to the federal government to the states, or to the people.

If approved in Congress and signed in the White House, the STATES Act would offer new protections from federal prosecution for those involved in marijuana transactions that are legal in their state. In April 2019, the act was reintroduced in the Senate by Democratic Sen. Elizabeth Warren of Massachusetts and Republican Sen. Cory Gardner of Colorado. A matching bill was also introduced in the House of Representatives, also with bipartisan sponsors, including Democratic Rep. Earl Blumenauer of Oregon and Republican Rep. David Joyce of Ohio.

If approved in Congress and signed in the White House, the STATES Act would offer new protections from federal prosecution for those involved in marijuana transactions that are legal in their state.

“In 2012, Coloradans legalized marijuana at the ballot box and the state created an apparatus to regulate the legal marijuana industry. But because of the one-size-fits-all federal prohibition, state decisions like this put Colorado and other states at odds with the federal government,” Gardner said in a prepared statement in April 2019. “This is an issue across America, with states like Utah, Oklahoma, Michigan, Vermont, and Missouri approving new or expanded programs just last year.”

The act would put the question of legalization in states’ hands, he said, and keep the federal government out of the regulated marijuana industry.

Here are five things to know about the STATES Act:

1. It Would Settle the States’ Rights Issue

In California, Massachusetts, Colorado, and the numerous other states that have approved a legal cannabis market, each transaction carries the risk of federal prosecution for drug trafficking. That includes medical marijuana sales.

“In the eyes of the federal government, state-legal business owners are the equivalent of heroin dealers,” Justin Strekal, the political director of the National Organization for the Reform of Marijuana Laws (NORML), told Weedmaps News. The likelihood of charges being filed seems remote – there has been no crackdown of state-legal transactions under the past two administrations even as the industry rapidly expanded – but the possibility remains an issue.

“Our federal marijuana laws are outdated and pose a threat to our public health and safety. Marijuana should be legalized, and we must reverse the harm of these failed policies by wiping clean the records of those unjustly jailed for minor marijuana crimes,” Warren said in a prepared statement. “Congress should take immediate action on these important issues by passing the bipartisan STATES Act and protecting states, territories, and tribal nations as they implement their own marijuana laws without federal interference.”

The bill states that transactions that comply with state laws would not be considered drug trafficking. It also instructs the Government Accountability Office to study the effects of marijuana legalization on traffic safety and prevents anyone younger than18 from working in marijuana operations.

2. Cannabis Would Remain on an Amended Schedule I

The Federal Controlled Substances Act lists marijuana under Schedule I, a category reserved for substances determined to have no medicinal value and a high potential for abuse. Meanwhile, medical professionals are recommending its use for a wide variety of ailments, including multiple sclerosis, nausea from cancer treatments, glaucoma, and opioid use disorder.

Under the STATES Act, it would remain categorized as a Schedule I substance, but would have new protections from prosecution for those who comply with state laws when possessing, selling, or transporting marijuana, so long as the states comply with a few rules. For instance, no one could provide marijuana to anyone younger than 21, except for medical purposes, and it could not be distributed at truck stops or highway rest areas.

3. It is Not Legalization

Some critics of the bill describe the STATES Act as de facto federal legalization of marijuana. It’s not.

In an interview with Weedmaps News, NORML’s Strekal pointed out that the act would do nothing to protect individuals from criminal charges for marijuana possession in states where it remains illegal. Nor would it expunge records for marijuana convictions, improve access to medicinal cannabis for veterans, or address issues related to immigration, he said.

For years, the regulated marijuana industry has operated in uncertainty. Some of that cloud cover cleared in August 2013, when James Cole, the U.S. Attorney General under President Barack Obama, issued a memorandum advising federal prosecutors not to focus their resources on cannabis operations that were legal at the state level. On Jan. 4, 2018, then-Attorney General Jeff Sessions rescinded that memo. His successor, William Barr, opposes legalization but has supported the STATES Act as an improvement to the current uncertainty.

So far, there has not been a federal crackdown on state-legal operations, but the possibility remains. Strekal said the STATES Act could clear the air and move the country forward on legalization.

“It’s important to recognize that the ultimate goal is to end the federal prohibition of cannabis. It (the STATES Act) would provide much-needed certainty for the existing state-legal marijuana businesses,” he said. “But it would do nothing for the individuals who have suffered from criminal convictions or move states to end the practice of jailing people for possession.”

4. It May be a Step Forward

A trade group has come out in favor of the legislation.

“We’re supporting the STATES Act,” said Morgan Fox, a spokesperson for the National Cannabis Industry Association. But he said his group is putting more effort into the Marijuana Justice Act. Sponsored by Democratic Sen. Cory Booker of New Jersey, that bill would end the federal prohibition of marijuana, removing it entirely from the list of controlled substances, while expunging federal convictions for marijuana offenses. It would also invest in communities hit hardest by what Booker calls the failed war on drugs.

Fox described the history of marijuana law reform as one of incremental steps. He said those efforts are seeing more momentum than ever before, putting advocates in a position to ask for a lot more at the federal level. Still, Fox called the STATES Act a great first step.

If enacted, he said, the STATES Act would be a step in the right direction. But it would not be the final step. In a separate interview, Fox said something similar.

“Even if it passed tomorrow, there would still be a lot of work left to do,” Fox told Weedmaps News.

5. Approval is Not Guaranteed

The bill seems to have a clear path for approval in the House of Representatives, where House Speaker Nancy Pelosi, a Democrat from California, has publicly supported legalization. Things could be tougher in the Senate.

Senate Majority Leader Mitch McConnell, a Kentucky Republican, does not support any marijuana legalization efforts, despite backing the reforms for growing and selling industrial hemp in the 2018 Farm Bill, expected to be a big boon to agriculture in his home state.

In 2018, McConnell blocked the STATES Act and has said he would not support legalizing marijuana, regardless of his support of industrial hemp.

If Warren and Gardner are able to thread that needle, and it passes in the House, the bill would land on President Donald Trump’s desk. Proponents of the bill expect a signature there, citing a June 2018 statement in which he indicated he would likely sign it. Trump has stated a willingness to leave marijuana laws to the states. But so far, the Trump administration has not exactly led the charge on cannabis law reform. In signing statements, including one in February 2019, Trump has indicated he may disregard restrictions on federal interference in state medical marijuana laws.

Also, his signature on the STATES Act would hand a win to Warren, a prominent name in the crowded field seeking the Democratic nomination to try to take his job in 2020.

But Michael Correia, the Director of Government Relations for the National Cannabis Industry Association, said the STATES Act is the most direct route to reconciling the discrepancy between state and federal law on marijuana.

“It’s probably the simplest fix out there,” Correia said.

How Cannabis Helps Treat Epilepsy and Other Neurological Disorders

After 4/20, Advocates Want the Next Day to Rally for Cannabis Justice