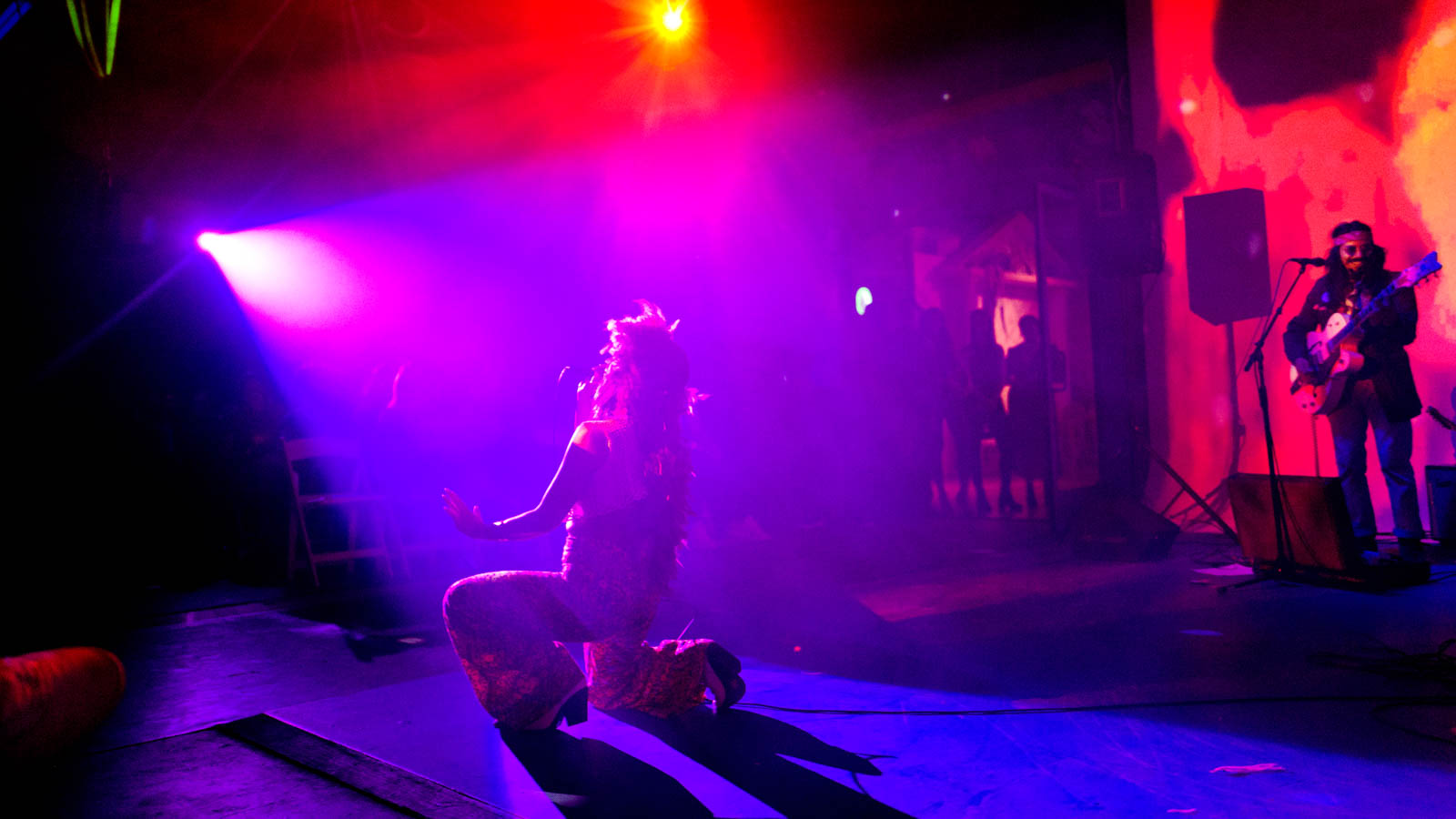 The venue is Creatington, a 1930s brick building just outside of downtown Los Angeles in Boyle Heights. Inside the venue doors, the space is energized with bright colors, warm shadows, and a smattering of psychedelic sounds playing through the house speakers. One could get lost in a dab of Papa’s Select sauce and the stream of ’60s rock moving through the air as an exciting, uncanny, and intimate merging of two revolutionary eras of cannabis — the ’60s and the now — but that’s the ideal state of mind for “Marijuana Madness: Revolution.”

The show within the event is a burlesque musical created by Los Angeles burlesque artist Miss Marquez and sponsored by Grassfed LA, a cannabis-themed event production company. The show is the second part of a three-part series. Part 1, “Marijuana Madness: Prohibition,” covered cannabis culture and politics of the 1930s, 40s, and 50s through the art of live burlesque. For Marquez, the countercultural revolution era of the ’60s seemed like the next logical step for Part 2.

Marquez’s inspiration for a cannabis-themed multimedia burlesque show was a book called “Bop Apocalypse: Jazz, Race, the Beats, and Drugs” by Martin Torgoff. The book explores the influence of drug cultures on the music of the 1920s prohibition era up until the 1970s. With the concept of cannabis evolution through America’s cultural revolution as a starting point, Marquez laid out a story for the show and put the rest of the act together with other local artists.

“I’ve been doing burlesque for eight years here in Los Angeles, and I work with all of these players in various degrees, in different night clubs and live performance opportunities,” Marquez said. “The style of burlesque we do [in this show] isn’t classic burlesque. That’s why it lends itself to psychedelic rock, which is a little different than your normal burlesque show.”

The rest of the show’s sizable talent included burlesque artists Nikki Dalonzo and Jamie Donovan, and vocalist Jessie Payo accompanied by drummer Willie McNeil and band the Willie McNeil Experience. The band performed several ’60s hits over the course of the show, ranging from “Incense and Peppermints” and “Season of the Witch” to “Purple Haze” and Janis Joplin’s “Ball and Chain” (a powerful showcase for Payo’s vocals), providing a killer soundtrack for Dalonzo’s, Donovan’s, and Marquez’s performances. Dalonzo’s sets were marked by a swinging-London/go-go aesthetic, Donovan a dark beatnik vibe, and Marquez the persona of a glossy-green glam-rock cannabis queen.

For those of us who love cannabis, we know Abdullah, he’s fucking amazing. So it’s amazing to see him in the live environment. Click To Tweet

Both before the show and at intermission, guests decked out in ’60s mod attire (because people actually dress up for shit in Los Angeles) mingled between turns at the dab, vape, and cannabidiol (CBD) cocktail bars. The show’s visuals — projected on a flowing white background to great, hazy effect — ranged from colorful psychedelic flourishes of neon paisley to Vietnam war footage and sequences from “Easy Rider.” It’s quite a trip to be hit with a loud, menacing live rendition of The Doors‘ “Five to One” during a heated burlesque set layered with projected footage of Vietnam and Richard Nixon.

The show’s narrative — beginning with the early influence of the Beat generation and moving through the hippy movement and Nixon’s war on the ’60s — was aptly handled by host Abdullah Saeed: former co-producer and host of Vice’s “Bong Appétit,” current writer and actor on HBO’s “High Maintenance,” and co-host of the “Great Moments in Weed History” podcast. Marquez tapped Saeed to host the show after he came to a few of the “Prohibition” shows.

“Abdullah kind of exists outside of time, and he’s the guy that’s gonna take you on the voyage and direct you through the psychedelic experience,” Marquez said. “For those of us who love cannabis, we know Abdullah, he’s fucking amazing. So it’s amazing to see him in the live environment.”

Saeed opened the show with the story of how Bob Dylan got the Beatles high for the first time, a story he’s covered in a “Great Moments” episode. With a signature stoned sense of humor and passionate, tongue-in-cheek approach, Saeed’s narration oriented the whole production in a sense of being both outside of time and inside parallel moments of cannabis culture.

Taken altogether in a well-applied, concentrate-assisted haze, all the elements of this show made it far more than an empty nostalgia trip. According to Miss Marquez, this was the intent behind the entire production.

“The prohibition show really talked about government and politics and how that stigmatized cannabis,” Marquez said. “So with this show it’s more about the counterculture, which I think is a good reflection of what we’re going through now politically and culturally.”

And the whole show did feel like an earnest connection between the plant’s cultural history and our current cannabis moment. In other words, it didn’t feel like a flimsy excuse to get high.

This is the type of atmosphere that Grassfed partners Dan Braunstein and Tomer Grassiany want to have at their cannabis events. “We want cannabis to be a component, but not the main event,” Braunstein said during the show’s intermission.

Braunstein and Grassiany are also adamant about providing smoke-free consumption methods at their events to avoid a hotbox environment and make events inviting to cannabis consumers and non-consumers alike. The goal in having cannabis at the events is to help destigmatize the plant by treating it as an antioxidant, healing ingredient, and cultural element.

Try These Terpene-infused Products to Improve Your High