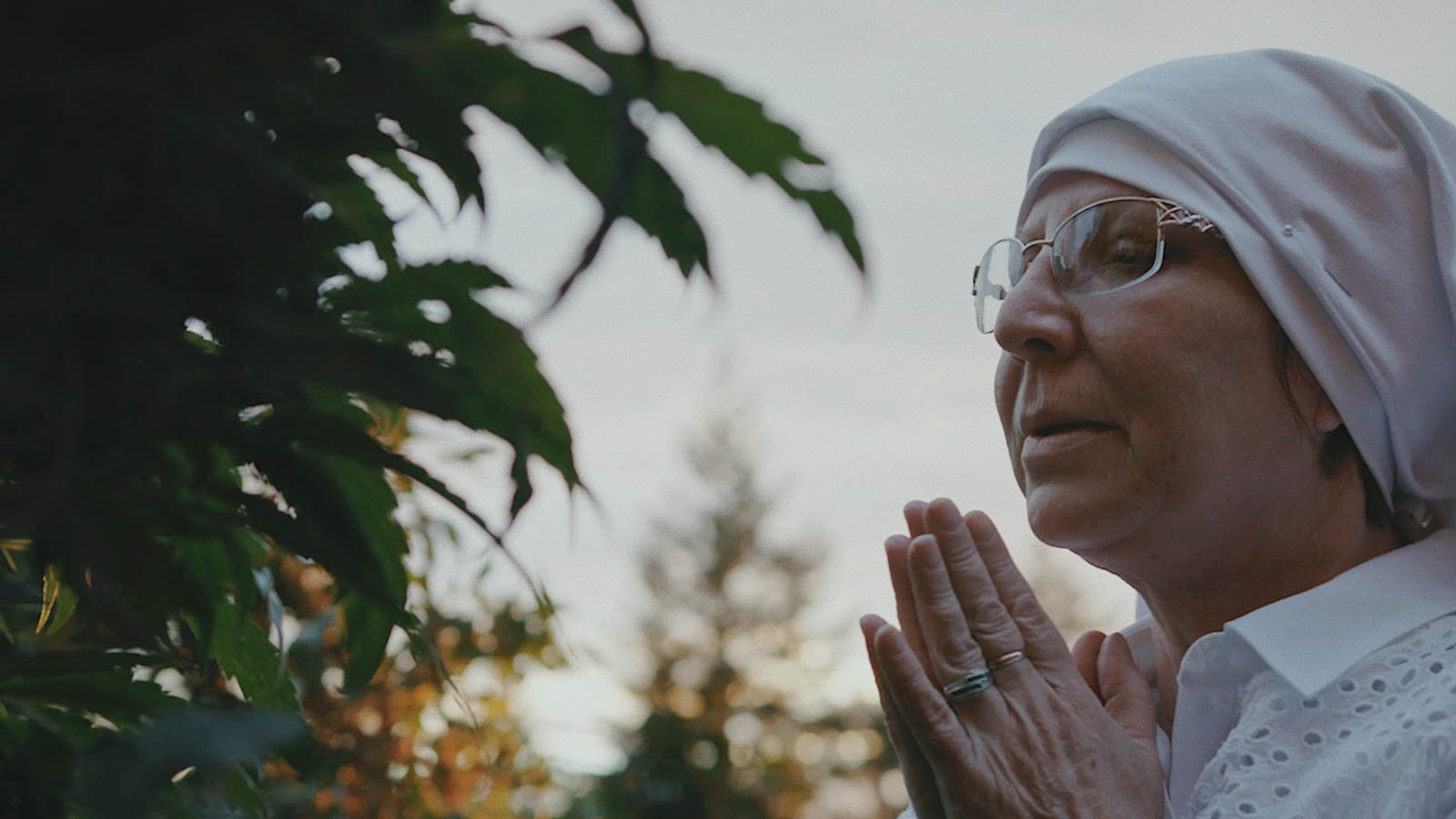 The documentary “Breaking Habits” has been described as a documentary about weed-smoking nuns. Intriguing, right? But the film, it turns out, is so much weirder and more unexpected than the brief description lets on. We’re talking betrayal, bigamy, meth addiction, a sheriff made for a casting in a Western, and shootouts, for starters.

The feature-length documentary by British film director and producer Robert Ryan is set in Merced County, in California’s San Joaquin Valley, and tells the story of the transformation of a Midwestern telecommunications consultant named Christine Meeusen into Sister Kate, the head of a cannabidiol (CBD) products company, Sisters of the Valley. Beside the business, Sister Kate is also the leader of a group of like-minded radical feminist nuns, unaffiliated with any traditional religious order, who wear habits like Catholic nuns but like to blaze up, unlike Catholic nuns.

“Breaking Habits” is set for release in theaters and streaming online April 19, 2019.  Here are the 5 biggest reasons to check out the documentary.

Warning: There’s going to be some spoilers below.

At the center of the story is how Meeusen went from being a corporate bigwig who once voted for Ronald Reagan, to Sister Kate, a “self-declared, self-empowered, anarchist, activist nun,” and cannabis entrepreneur and enthusiast. What started as a kind of joke — Meeusen donned a fake habit for an Occupy Movement rally and began calling herself Sister Occupy — soon became a real calling that awakened her dormant spirituality and drew others into the fold.

2. This Story is Somehow Based in California

Early into the film we’re introduced to Merced County Sheriff Vernon Warnke. With his cowboy hat, Wyatt Earp-esque handlebar mustache, holstered six-shooter hanging just behind his desk, and “marijuana epidemic” talking points, you’d swear the doc is taking place in West Texas and not in the middle of California.

But this is a conservative part of the state and Merced County is especially so when it comes to cannabis. It has incredibly restrictive laws there — no commercial cannabis activities, including for medical use, are allowed — which also makes it hard to believe this is taking place in a state with legalized recreational cannabis (voters legalized adult-use in 2016 during the filming of the documentary) and a medical cannabis program that’s been in place for more than 20 years.

3. The Story Kicks Off with an Epic Betrayal

Through old video footage, we’re introduced to Meeusen’s husband, Gary, a stay-at-home dad described as a rock-solid guy who was there for their three kids. Christine was the breadwinner, a self-professed “corporate girl.” For 17 years, everything seemed normal until the day Meeusen discovered Gary had been secretly funneling massive amounts of money from her business into various accounts he’d set up. Oh, and he also never bothered to actually divorce his first wife, according to the film.

Meeusen and the kids ended up in California living with her brother Joe, who persuaded her to get into the cannabis business. She began growing for the medical market, selling (sometimes giving) cannabis to terminally ill patients. But when she discovered Joe had been selling on the black market, a blow-up ensued and Meeusen was left homeless for four months. Meeusen alleges her brother took a baseball bat to her knees. Joe claims he never got physical with her.

At the beginning of the film, there’s a dramatic shot of Sister Kate pointing a shotgun straight at the camera. It’s the first of many instances involving firearms. We learn about three shootouts, including a home invasion in which one intruder was killed and another wounded. Joe also had his finger blown off during the fracas.

Later, we meet Zane, who works security for Sister Kate, and describes the attempted robbery of their outdoor grow. The would-be thief is fairly nonchalant about Zane shooting at him but finally runs off through a cactus patch, cursing the whole way. This is followed by a much more harrowing story about a gang that peppered with automatic gunfire the trailer where Sister Kate and Zane were staying.

Sister Kate’s son, Alex, comes off as a solid guy. He’s helpful, obviously loves his mother, and seems to have it together. He’s a bodybuilder who takes care of himself. Alex is also a recovering meth addict who nearly died from an overdose the night before heading to rehab. In a film full of surprises, this may be the biggest. There’s a heartbreaking scene interposing the story of Alex’s plunge into drug addiction with footage of him as a sweet, happy child. Sister Kate managed to keep Alex away from meth during the first rocky six months after he got back from a stint at a halfway house by putting him on “house arrest” when all he was allowed was “food, gym, and weed,” according to him.

The documentary has its flaws, a lack of a clear timeline of events can sometimes be confusing and the exclusion of one of Sister Kate’s sons from the film is never explained. Even so, it’s a strange and wonderful tale of one woman’s journey from soul-crushing betrayal and loss to a fulfilling life and the creation of a spiritual family through the power of cannabis.

As Sister Kate says at the end of the film, “when people have everything taken away you should be scared, because they will do some radical shit.”